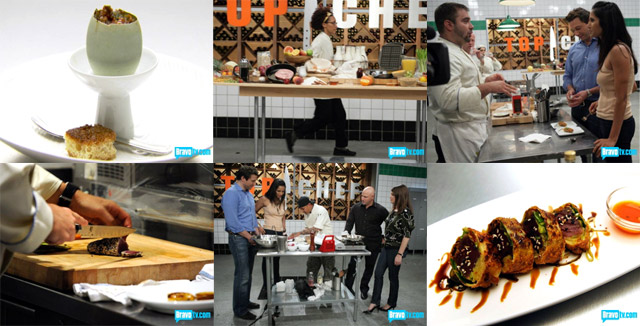 It was an episode full of corporate synergy! Sort of reminiscent of when Project Runway designers had to create an outfit for Today Show contributor Tiki Barber, last night's episode of Top Chef had contestants develop a dish they could demonstrate on TV for the Today Show. Plus there were reminders that the chefs are using...GE Monogram appliances in the kitchen!

First, they had to deal with a "breakfast amuse-bouche" quickfire challenge, judged by Padma Lakshmi and guest judge Rocco DiSpirito, who professed his love for bacon. The point of the exercise was to make a perfect bite of breakfast, which led to some of the chefs getting annoyed with each other and some to riff on things they liked or served their kids (hello, Ariane).

As for the TV demonstration-elimination challenge, the contestants needed to present a recipe within a short amount of time (2 minutes, 30 seconds), which more daunting than they thought. The challenge also confirmed that Daniel (the one with the weird beard who thinks Donald Trump is the richest man in NYC) is a ham-- he explained how he looked up to Bobby Flay's career and entrepreneurial skills and even threw in a little "Baba-booey." But the crowning moment was when the three best dishes were served up to actual Today Show hosts live-- there's nothing like Kathie Lee Gifford reacting badly to something! And if you want a spoiler, here's last night's winner on the Today show this morning, demonstrating the selected dish.

#today show
#top chef
#Top Chef 5
#Top Chef New York
Do you know the scoop? Comment below or Send us a Tip