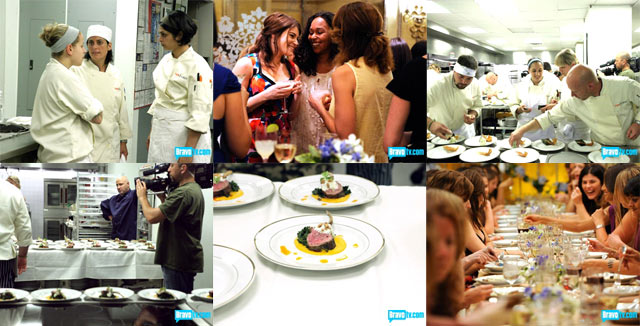 Top Chef usually has a wedding-related challenge of some sort, and this season's event was to cater the bridal shower of Top Chef judge—and Food & Wine special projects manager—Gail Simmons. Of course, Padma Lakshmi announced she was throwing the bridal shower for Gail. Cue cheftestant Danny saying that Gail would be a "hot bride."

Before any bridal shower theme explanation, there was a head-to-head Quickfire challenge where the contestants had to guess the number of ingredients in certain dishes. The contestants were then challenged to list all the ingredients—from proteins to mundane elements like salt. That was interesting, but more intriguing was Stefan's apparent crush on Jamie, who reminded him she was a lesbian. Still, Stefan, who said he had an "edgy" thing going on with Jamie and later admitted he married and divorced the same woman twice, made a pair of pants out of a cooking towel for Jamie's stuffed animal.

For the Elimination challenge (with guest judge Food & Wine editor in chief Dana Cowin), the twelve chefs were split into four teams, each taking one of the following: "Something Old," "Something New," "Something Borrowed," and "Something Blue." Some struggled with concepts, some clashed, but what was heartening was to see how the chefs all helped each other to expedite their dishes.

#Bridal Shower
#top chef
#Top Chef 5
#Top Chef New York
Do you know the scoop? Comment below or Send us a Tip