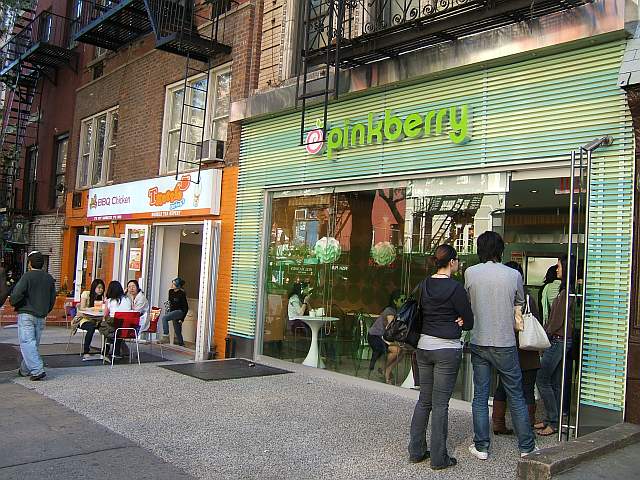 Fans of Korean fried chicken who frequent Saint Mark’s Place have been holding their breath since December for TKettle to start offering the crispy bird. But this delay hasn’t kept Andy Pan, owner of the bubble tea and dumpling emporium, from launching seasonal specialties. Colder weather brought soup dumplings and now that the mercury has started to rise above the 70-degree mark, TKettle is offering Taiwanese shaved ice.

During yesterday afternoon’s sneak preview there was a line outside of next-door neighbor Pinkberry. TKettle’s shaved ice debuts today. Flavors include red bean, litchi, mango, strawberry and yogurt. That’s right yogurt. Tkettle’s yogurt shaved ice is different from Pinkberry’s frozen yogurt, though. That’s because it uses liquid yogurt of the sort that's served in little plastic bottles as a digestif at the end of a Korean meals. It will be poured over the ice and topped with a crunchy answer to TKettle’s multicolored tapioca pearls: Trix. 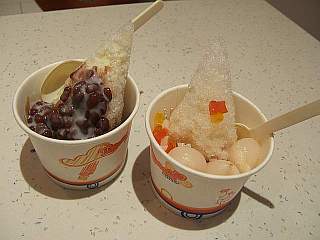 Trix isn’t the only unusual thing in TKettle’s shaved ice. Pan boasts of a “secret ingredient” that he makes himself. “Without this secret ingredient, it’s not Taiwanese shaved ice. It won’t have the same texture or flavor.” Pan wouldn’t reveal the ingredient, but did provide a sample of the plain ice without it. It was clumpy and hard, not at all like the flaky crystals in the flavored ice.

And now a preview of two of those flavors. Red bean and condensed milk with chewy tapioca pearls is filled with all sorts of interesting flavors and textures. The litchi, which contained several whole litchi as well as Gummi-bear like bits of mango and coconut jelly was good, if a tad too sweet. Both were welcome refreshment during yesterday's warm afternoon.