Tim Tebow has only officially been a New York Jet for six months, so he's making up for lost time by eating his way through area restaurants. And one of those was Morristown, NJ Italian eatery, Guerriero's. The Post reports, "who hungers to lead the Jets, put away no less than four heaping plates of food during a single meal... The chiseled, 236-pound signal-caller first chowed down on an eggplant dish and veal Sorrentino entree while breaking bread with Ohio State football coach Urban Meyer at Guerriero" 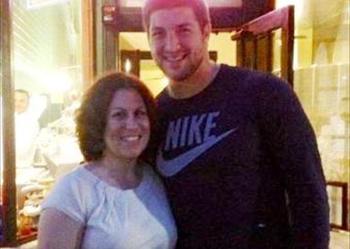 Apparently Tebow picked at Meyer's papardelle after eating his own dishes. And when owner Jack Guerriero asked him if he was still hungry, "He said, ‘Yes.' So he ordered a papardelle for himself — and a second Sorrentino." Guerriero also revealed, "He was really eating. His head was down in the bowl." (Rex Ryan has previously blamed his unsuccessful efforts to lose weight on "so many Italian restaurants" in the tri-state area.)

Maybe Tebow was eating to comfort himself after last week's game, since New Yorkers hate him. Or perhaps he's sad he doesn't have a Desperate Housewife to dine with! Don't worry, Tim—there are other virgins out here.

#eating
#food
#guerriero's
#italian food
#jets
#ny jets
#tim tebow
Do you know the scoop? Comment below or Send us a Tip