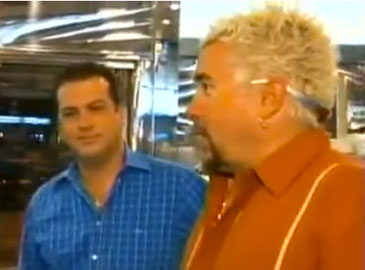 One of the managers of NJ's famous Tick Tock Diner in Clifton was arrested for allegedly plotting to kill his uncle. NJ Attorney General Jeffrey Chiesa said of George Spyropoulos, "He was motivated by greed."

Spyropoulos managed the Clifton location, while his uncle Alexandros Sgourdos manages a location in Manhattan and co-owns both restaurants. Chiesa said, "Spyropoulos allegedly planned in great detail how he would have his uncle tortured, robbed and murdered and he enlisted two men who he thought would carry out his ruthless plot."

The 45-year-old spoke to a man—who actually turned out to be a NJ State Police informant—about the dirty deed. The Star-Ledger reports, "He allegedly asked that man... to help him find someone who would kill his uncle after torturing him to obtain the combination to the safe his uncle kept inside his Clifton home, [State Police Detective Pete] Laying said. Spyropoulos believed the safe contained a large amount of cash, according to Chiesa and that his uncle was taking home an unfair share of the restaurants' profits."

Then the informant put him in contact with a hitman, who was actually a NJ State Trooper. The authorities say that Spryopoulos agreed to pay him $20,000 to kill, rob and torture his uncle, with a down payment of $3,000. Spyropoulos also asked the hitman to kill his uncle's wife if she saw anything and to make his uncle's body disappear, so it would look like a missing person case.

After Spyropoulos was arrested, troopers found two semiautomatic handguns, a shotgun and an assault-style rifle. Chiesa's office adds, "A search of his vehicle, a silver Mercedes Benz, revealed six cell phones and several thousand dollars in cash. It is not clear what the large number of phones were used for."

The Tick Tock Diner in Clifton is a Garden State institution—it was featured on an episode of Diners, Drive-Ins and Dives and Guy Fieri noted that Spyropoulos married into the business. Here's video—start around 13:10: