This Week in Brisket: Char No. 4's Lamb Pastrami 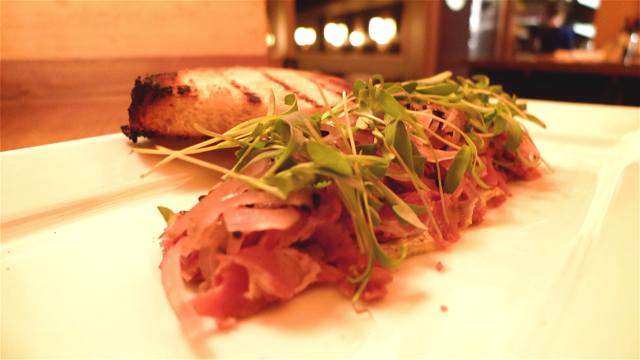 The lamb pastrami at the two month-old Smith Street restaurant Char No. 4 is made only in the spirit of regular pastrami, which is usually made with brisket (brisket's usually beef; a chest cut). Chef Matt Greco—who worked for Gray Kunz and Andrew Carmellini—first brines a hunk of lamb shoulder for a week. After that he makes a roulade, coats it with magic Greco spice and smokes it in-house, where it's plated with a tangle of pickled onion and greens, coriander aioli, and rye-caraway toast. From the looks of the photo above, it might be tempting to call the dish some kind of post-modern rift on the gastro-ethno-geographic terrain of old New York, but Greco's attention to his craft yields nothing but clean and bright flavors, and the whole thing is amazingly good. Like, $12 good.

Greco recently put an off-menu item—smoked & fried pork nuggets with Char No. 4 hot sauce—on the menu full-time. Four dollars gets you six deep-fried trotter and ham squares, gleaming meat gems. The hot sauce came from a batch of chili peppers Greco pickled and intended to use on another plate; when they turned out to be too scorching, he pureed the batch and tweaked it with more spices and vinegar. As a bonus, Shameless Carnivore author Scott Gold often pours alongside bartender Jeff Galli, guiding you through the menu and the wall of whiskey behind the bar.