Many food purveyors throughout the city have taken a stab at the ultimate southern staple—biscuits—but very few have made this flaky pastry the only option on their menu. The Big Bottom Biscuit Bar, which opened this Thursday and is run from the coffee window of wine bar Osteria Cotta, is doing just that.

"People ask if we're going to do anything else, and we say, 'Nope, just biscuits,'" explained co-founder Michael Volpatt. "Maybe we'll have some specials later on, but we're focused on biscuits."

The menu features both sweet and savory bites, with options ranging from the simplest butter and jam biscuit ($4), to a biscuit topped with fresh berries and whipped cream ($6), to the star of the show: the Sea Biscuit, which Big Bottom calls its challenge to NYC's ubiquitous bagel and lox ($10).

The Sea Biscuit could definitely be considered a dressed-up bagel: it is, of course, topped with smoked salmon and capers, but the usually-raw red onions are instead pickled and the cream cheese is replaced with crème fraiche. It's smaller and lighter fare than a bagel, but the buttery biscuit's substantial toppings means it's just as filling. 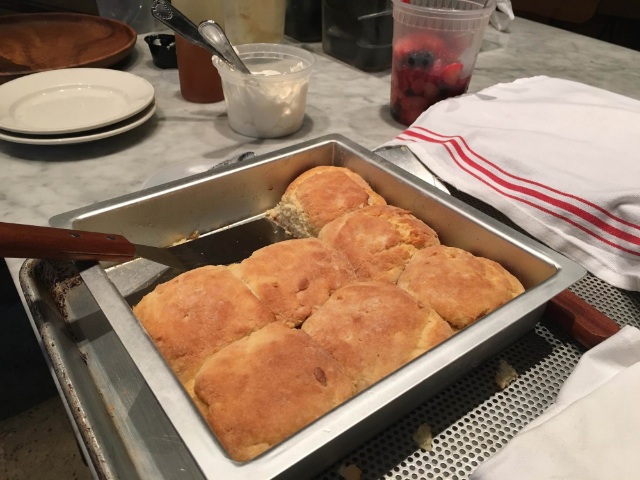 Since Big Bottom is run from Osteria Cotta's coffee window, they're serving up drip coffee ($3 small/$3.50 large) and cold brew ($4.50) from fellow west-coast transplant Stumptown Coffee. On sunny days, the best course of action is definitely to grab a biscuit and cold brew and head to Central Park, which is just a block away. (Seating inside is limited.)

Unlike most biscuit spots, Big Bottom doesn't claim any southern heritage: the pastries originated at the Big Bottom Market in Guerneville, California, which was founded in 2011 by Volpatt and his business partner, Crista Luedtke. The biscuits are a family recipe that originated with Luedtke's grandmother.

"When we were opening up the market, we were trying to figure out something different that could be a draw," Volpatt said. "We were in a planning meeting tasting food, and Crista's mom walks in and she's got this huge plate of biscuits and was like 'I figured it out.' And it became this thing for us, we decided to make the biscuit, rock the biscuit, and do it really well."

As a (sort of) southerner—we have good biscuits and gravy in Northern Florida!—I felt it was my duty to try Big Bottom's take on the quintessentially southern dish to see if it would stand up to the test. Most gravy recipes call for a hefty serving of sausage, but Big Bottom's vegetarian gravy (shallots, organic cream, fresh herbs, and some "other secret spices") was just as savory as most meat-based versions. There's absolutely no way to make biscuits and gravy photogenic, but this one was delicious.

And the name? Before being renamed after logging giant George Guerne, Guerneville was named Big Bottom in reference to the town's dense redwood forests. "I was researching the town's history and stumbled upon the name," said Luedtke. "At first, Michael was like, 'No way, I'm in PR, this is a PR nightmare' but it's really a PR dream!"

#big bottom biscuit bar
#biscuits
#Osteria Cotta
#Upper West Side
#uws
#original
Do you know the scoop? Comment below or Send us a Tip