"I'm drinking my sweat right now," Keely Gerhold says as she lifts a pint of Lithology Tinyfield Amber Ale to her lips. But it wasn't the drinking that caused Gerhold to perspire, it was the process that filled that glass. Gerhold is on the forefront of a local food movement that has swept up New York City, leaving a robust craft beer scene in its wake. But instead of opening her own brewery, Gerhold went a little further. If people want beer made in New York City, why not grow the components of that beer in the city, too?

Last year, she and her business partner, Katrina Ceguera, founded Tinyfield Roofhop Farm on the roof of the Pfizer Building in the Bed-Stuy. They planted hop plants—a perennial flowering vine that is a principal ingredient in beer—in buckets and watched them trellis up a steel spiderweb of industrial infrastructure left over from the days when the building was a drug manufacturing plant. "It's creating an ecosystem up there," Gerhold explains. "Now if you want to source local, organic hops, you can."

In 2012, the New York State legislature passed the Farm Brewery Bill, which aimed to encourage breweries in New York to source ingredients—particularly hops—from farms in the state. Until 2018, breweries that source at least 20% of their hops and 20% of other ingredients from within New York state will be certified as a "New York State labeled beer," a boost to their locavore brand. That percentage will increase over time until until 2024, when breweries will have to source 90% of hops and 90% of other ingredients in order to be certified.

Ceguera and Gerhold saw this bill pass and began to form an idea. "We saw this opportunity, especially in New York City where all these breweries are popping up, to be on the forefront of the bill," Ceguera explains. Tinyfield Farm seeks to offer local breweries a unique product that's more difficult to source. While most breweries use preserved, pelletized hops in their brews, Tinyfield Farm offers fresh hops, known as wet hops, that must be used within 72 hours after the harvest and offer a less bitter alternative to dried hops. "We were hoping to position ourselves to be this really hyper-local thing for New York City brewers to take advantage of," Ceguera says. "To have ingredients from walking, biking distance of wherever they're brewing" 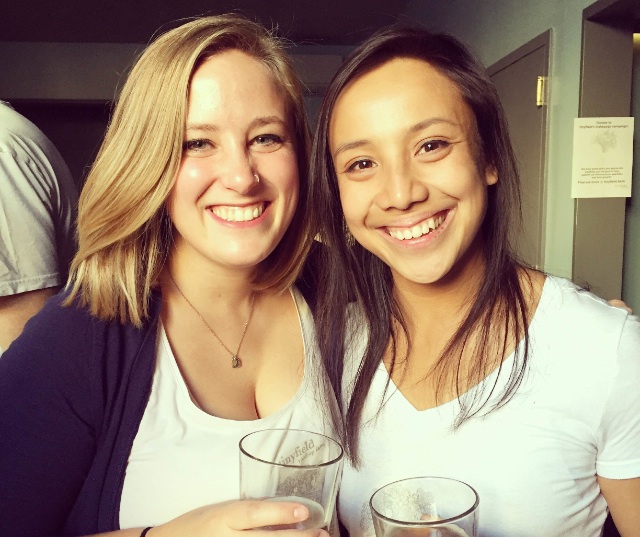 Ceguera and Gerhold met in the urban gardening world in 2013, when they worked together through Americorps for Green Guerillas, a non-profit that works to establish and maintain community gardens throughout the city. After work, they often bonded over a few beers and dreamed of one day starting their own farm. "We said, 'Let's buy land, which is totally impractical because young people can't afford land,'" Gerhold admits.

Since they knew they couldn't buy a farm in the countryside, they decided to look for work as urban farmers. But while urban farming may be a hot topic these days, finding work as an urban farmer in New York City turned out to be about as hard as finding an affordable apartment. "Turns out there are very, very few jobs in farming in New York City," Ceguera said. "That was the motivation behind starting our own project, that's the only way to do it."

"Starting out was challenging," Gerhold recalls. "We didn't have money, so we wanted to do something without money." Through loans and out-of-pocket funds, they were able to secure space in the Pfizer Building. Pfizer used the 660,000 square foot space to manufacture pharmaceuticals for over 150 years until they closed the plant in 2008 and sold the building to Acumen in 2011 for $27 million. Since then, the building's new owners have sought to make the space into Brooklyn's mecca for small food manufacturers. Tenants include Madécasse Chocolate, McClure's Pickles and Sfoglini Pasta Shop among many more. 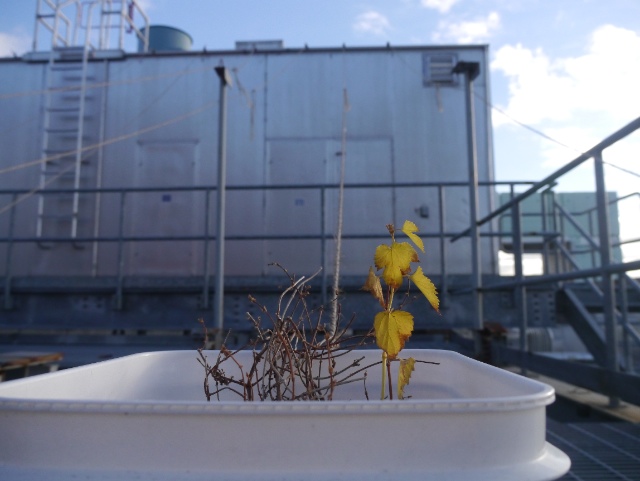 With so many like-minded small food businesses inside, the building seemed like the perfect place to plant the roots of Tinyfield Farm. In April of 2015, the duo signed a lease and began the difficult work of building the farm. Ceguera and Gerhold said they originally had a much bigger model in mind, but decided to scale it back and refined their plans to truly live up to their name with a 1,000-square-foot operation. They took out a $10,000 loan from Kiva—a crowdfunded loan non-profit that allows people to lend directly to borrowers—and used it to buy a greenhouse, soil and sixty hop plants from a nursery upstate to get started. With the help of friends, they also carried 8,000 pounds of dry concrete to the roof and mixed and poured it into a foundation that would keep the greenhouse from flying away into the Manhattan skyline in the distance.

Over the course of the summer, the hop plants grew and twisted up agricultural twine. When the time came to harvest, the Tinyfield farmers cut down the vines and picked the hop flowers. This year, they harvested enough hops to produce an amber ale (a 100 gallon batch) with Lithology Brewing, a small brewery in Patchogue on Long Island. But next year, they plan to grow more. Hop plants naturally produce a two-three times greater yield in their second year and the farmers hope to add additional plants in the spring. Ceguera and Gerhold also launched an Indiegogo campaign to buy the plants, expand their production of salad greens in the greenhouse and build an event space to host guests under a living arbor of trellised hops.

Still, there is a long way to go before Ceguera and Gerhold quit their day jobs and dig the dirt full time. "I would love to only do this, but we are realistic of the long dream of it," Gerhold admits. Both she and Ceguera work part-time on other urban farming projects to help support themselves. Tinyfield Farm is a passion project and each year they hope to learn and scale up a little bit. "I think next year we'll have enough to make an IPA," Gerhold muses.

William Mathis is a freelance journalist and farmer based in Brooklyn, New York. Follow him @MathisWilliam.