This morning Dominique Ansel Tweeted this gorgeous photo of a Cronut being held up to the damp light inside of MoMA's Rain Room. And now the world finally has a replacement image for Scrooge McDuck diving into a pile of gold coins.

If your average New Yorker had tried to create this magical moment without a serious connection to both the pastry chef and the museum, it would have meant waiting on line for approximately 12 hours—4 for the Cronut, 8 for the Rain Room. But the chef didn't have to wait for either, he told us this afternoon:

"The MOMA has been supportive of the bakery since B.C. (Before Cronut). Last year we did a nice event here and I was fortunate to have met some friends then. They were kind enough to invite me to a private after-hours viewing event of the Rain Room, and I thought it'd only be appropriate to thank them with a Cronut.

It wasn't until we were standing there in the Rain Room holding the Cronut box and chatting about how early the lines for both are that I realized the two items are now standing face-to-face. Decided to capture the moment. It's amazing the power they both hold. Then I did a few dramatic silhouette poses of my own, as well... sans Cronut."

Now all we need is for Jeff Koons to create a Cronut sculpture for the museum, or Tilda to eat one in her glass box, Tom Otterness to shoot a cronut, or Jay-Z to toss them at patrons while dancing with Marina Abramović during a #Sharknado and we can all take the rest of the summer off.

IMPORTANT UPDATE ABOUT CRONUTS IN THE RAIN ROOM: Dominique Ansel wasn't the first man to bring a Cronut in the Rain Room... this dude did it last week. And Andy Warhol probably did it in the '60s. 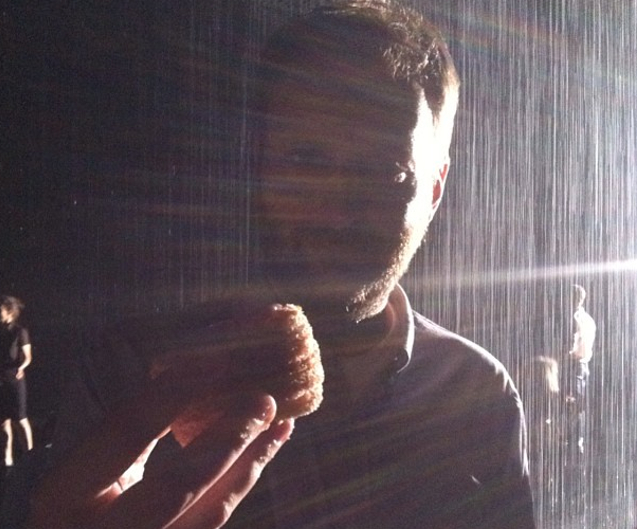