This Is The Worst New BBQ Place In NYC This week on Quick Bites, a disappointing BBQ spot opens in Gowanus.

THE VIBE
Pig Beach is the food component of Swan Dive, a huge new outdoor barbecue-and-booze garden on the western shores of the Gowanus Canal, located in the yard behind the Green Building right near the Union Street bridge.

The summer-long pop-up is the brainchild of two all-star competitive barbecue teams—Shane McBride of Balthazar heads up one, called the Ridiculous Barb-B-Crewe; and Ed McFarland (of Ed's Lobster), Matt Abdoo (Del Posto), and Rob Shawger the other, called Salty Rinse BBQ. They've all joined forces to share their passion for sweet, smoky meats.

The Swan Dive space is wildly ambitious, with some two dozen shareable picnic tables filling the center and along one wall; a number of niftily-designed, T-shaped "bars" scattered about for standing and eating and drinking; plus a long narrow counter, a drink or elbow perch of sorts, running the entire length of another wall. At full capacity, it can accommodate around 150 people.

The bar is at one end of the space, with the Pig Beach pit and food service counter at the other—strings of sparkling lights drape over the entire yard. If enough people come to liven things up, Pig Beach could be an appealing place to spend a sultry summer's night.

THE BITES
Here's the thing. The food at Pig Beach is nowhere near ready. Given the pedigree and awards won by the pit captains, one might assume that at some point (soon?) they'll get their act together, but my dinner last Thursday night was almost entirely terrible.

The worst offender was the Half-Rack of Baby Back Ribs, which had been cooked who-knows-when for at least three times longer they should have been, then left somewhere to dry out even further, waiting for me to arrive. I could see from six feet away that these were completely desiccated, so the young man who sliced them off and plated them for me definitely knew too, but didn't care. Or maybe he wasn't paying attention, which, considering I was one of like five people in the whole place, is almost as bad. 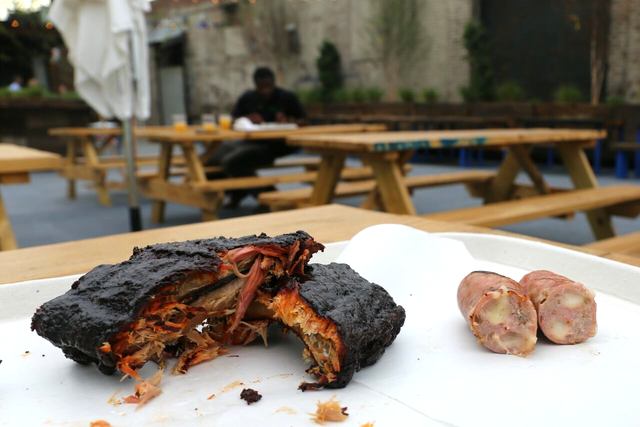 I suppose I could have returned them, but really, how could anyone serve anyone something that was so obviously, visibly wrong? Just depressing. Also, the piles of Pork Shoulder I saw on a couple of other trays didn't look much better, moisture-wise, so I wasn't even sure what I would have traded my ribs in for.

Another set of perhaps-logistical problems is that there's no kitchen, nor steam table. And the sides... while obviously the meat is the most important part of any barbecue experience, we all know that stellar sides can go a long way towards smoothing over any disappointment with the main show. Unfortunately, the ones at Pig Beach right now are not good.

Particularly not good was the Jersey Tomato Salad, which had been made "two hours ago," placed in an little plastic container, and stuck in the fridge. It tasted exactly as cold, limp, and flavorless as that sounds. Slightly better (less tired and frigid anyway) were the Benton's Deviled Eggs, though even here there was distinct lack of excitement involved, in both the eating and, presumably, in the making.

The few enjoyable bites I had that night involved the Yankee Red Hot link, a juicy sausage oozing with provolone. Still, it could have benefited from a bit of spicy kick.

I understand that Pig Beach just opened, but beyond the frequently-cited defense of reviewing a new spot before they work out all the kinks—namely: they are inviting the public to come in and eat, and were happy to accept my money for their food—I'll also say that most of the restaurants I've discussed on Quick Bites were just as raw at the time I ate at them, and many of those have been very good, with the kitchen throwing all of their skill and love into the job.

At Pig Beach, in contrast, one of the principals spent the entire time I was there bragging about his team's past accolades to some bigwig at the bar, instead of standing by the fire, manning the meat.

THE VERDICT
If you work or live in the immediate area, by all means you should check out Swan Dive/Pig Beach (the naming is a bit confusing) for some outdoor evening drinking, but before you shell out sixty bucks or so for a tray of barbecue for your table, you might want to split a half-rack or something, to see if any improvements have been made. The men behind the two pit crews are certainly capable of making good food, but it remains to be seen whether they will, in fact, do that.

Pig Beach is located at 480 Union Street right near the Gowanus Canal, and is open from 3 to 11 p.m. on Tuesday through Thursday, from noon to midnight on Friday and Saturday, and until 10 p.m. on Sunday. Closed Monday. No phone. swandive.nyc.

#bbq
#Gowanus
#pig beach
#quick bites
#swan dive
#original
Do you know the scoop? Comment below or Send us a Tip