This Hot Dog Is A Carrot!

The Carrot Dog is, at first glance, simply a whole carrot hiding in a hot dog bun. But the Carrot Dog is also more complex than that—take a bite, and you'll notice the distinct hot dog flavor, which is either delightful or horrifying depending on where your taste buds stand with the ballpark staple. Either way, it is disorienting, that classic hot dog taste living harmoniously in a carrot. And to take it to another level, the Carrot Dog has also been doused in a hot dog smell. It's all so familiar but disturbingly different—it's the uncanny valley of cuisine.

Who did this to Carrot? Will and Julie Horowitz of Harry & Ida's, who smoke and cure the whole carrots for five days to create a natural "casing" meant to mimic the texture and taste of a traditional hot dog. This involves salt, pepper, garlic and oregano (no nitrates!), and a smoking process that uses oak and maple. This process gives it that undeniable hot dog smell, like it or not. From there, the Carrot Dogs are brought to by CHLOE, where they are grilled and served up NY style with sauerkraut and yellow mustard in a potato bun. 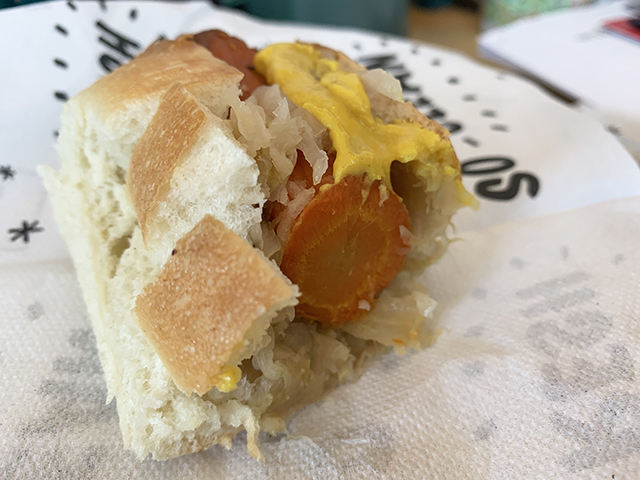 The result? Well, Gothamist staff ate Carrot Dogs for not one, but two lunches this week, and the takeaways vary. As a longtime vegetarian, I was delighted by Carrot Dog, which feels more natural to eat than, say, a Tofu Pup. While the latter is closer to the real deal, I remain confused as to why anyone would actually want that. The Carrot Dog is more like eating a tasty, crunchy-but-softened carrot while sitting directly next to a very strong hot dog-scented candle, which may or may not be for you. Some additional thoughts from my colleagues:

Takeru Kobayashi with the Carrot Dog. (Photo by Jessica Petway)

The future is plant-based, however, and Harry & Ida's is ON IT. While the Horowitzes are "known for [their] real pastrami," the NY Times reports they are "increasingly experimenting with vegetables." Will Horowitz told the paper, "I'm starting to pivot our entire smokehouse business in this direction." Gothamist was told their other current creations include a Smoked Watermelon Ham, Prosciutto Radish, and "Beef" Carpaccio from Smoked Celery Root.

The Carrot Dog ($6.75 for a 7-incher) is the only one of their vegetable-"meats" offered at by CHLOE, but a publicist for the chain tells us they "would definitely like to have more of their items after we test the Carrot Dog!"