This Dude Wants To Get Naked And Drink Tea With You

Of the many DIY pole signs in the city telling us who to have "one nite stands" with and who Tony the bus driver has had sex with, this is the first time a sign has propositioned us for naked tea. You can see the sign, which was spotted by a tipster on a pole on 20th Street and 10th Avenue near Chelsea Piers this morning, in full below. We spoke to this Koji Frahm, 26, today to find out more about why he wants to have a naked tea party with us: "I was hoping the idea of a tea party would be the conceptual Trojan Horse for an experience that most people desperately want but would never consider." 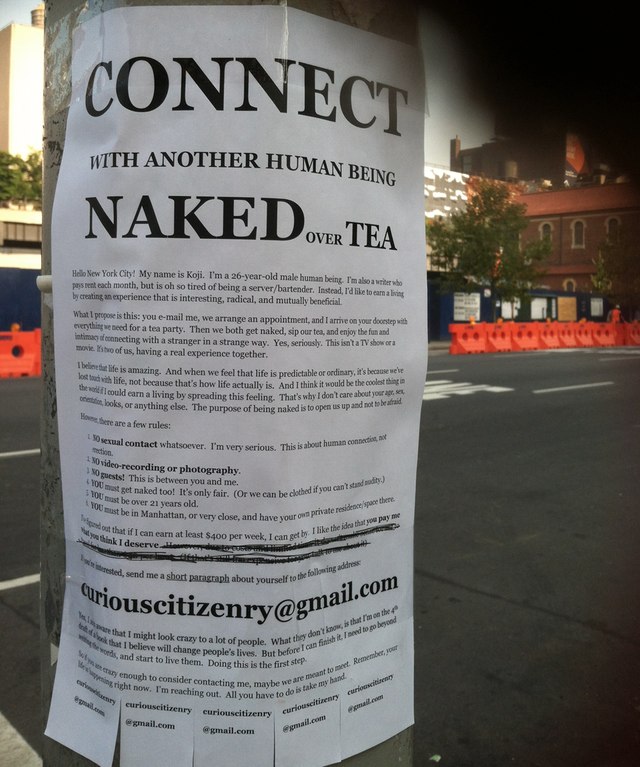 "I've taken tea with strangers, been naked with strangers, and spoken to strangers, just not all at once," Koji, a Greenpoint resident, told us. He said he chose tea because it is the least intimidating drink: "When doing something this radical, it's important to make it at least partway understandable to your average streetwalker. Otherwise you only shock them."

So far, he's had at least three people (other than us) contact him about his naked tea party offer (though none have taken place yet). But before he put the sign on the pole, he put the message up on Craigslist, and met one man for coffee at a Starbucks, where they spoke for an hour. It seems whatever happened between the two men affected each of them:

I told him not to bother paying me. After that hour, he had to go, and he insisted on giving me 50 dollars. He said that he was very impressed, and grateful, and he hoped to see me again. After he left, I crossed out the part about suggested payment, because I only want money that is an expression of gratitude, not owed.

Koji said he initially planned to charge people a specific amount for his service because his other projects would take time to get off the ground, "and in the meantime there is rent to be paid." But more than that, he thinks he has a talent that he hasn't used fully yet: "I am a human being with a power to connect with people, in a city of great loneliness, and yet I can't combine those two things enough to even pay the bills? It seems like a failure of imagination more than an impossibility."

Finally, we asked how naked tea parties tie in with the book he is writing. We'll let Koji take us out on this one:

My book is a book unlike any book I've ever read (and I've read many). Let me put it this way. The ocean makes a sound, yes? You hear a noise in your ear of your imagination, whether it's waves or a deep gurgling. And no matter what you say about it, that is the sound of the sea. It cannot be denied. Similarly, seagulls have their call, and I'm sure that each seagull, if we listened closely, has its own unique cry. I believe that humans have their cries too, so to speak, and they spend much of their lives looking for it. They seek their song.

This book is my song. I wrote the first draft in a month and a half, in a flurry. I didn't give myself time to doubt. I'd written fiction for 7 years before that, and never thought I'd write a nonfiction book, or even a book, for at least another few years. Instead it all came out. Fully formed. As though the voice of a future self was calling back to me. And now I'm almost done with the book. But there's something missing. And what's missing, is that I am not the writer of this book yet. I am merely the speaker for a future self, a true self, what I was calling "my best self." Yet, the entire book, in a certain way, is about self-realization. It's about finding your song. And I believe that to truly finish the book, I will need not only to serve as the messenger, but to become the writer as well. I will have to answer the call of my life.

And that, good sir, is a brief and incomplete explanation of what that poster has to do with my book. The person who wrote the first 3 drafts of this book would never put up such a flier. However, I would, and I have.