This Doughnut Features An Avocado-Chocolate Filling

Dun-Well's Christopher Hollowell tells us, "Avocados are a superfood! But beyond that they are a fatty rich and creamy dream for any young epicurean. At Dun-Well we strive to toe the line between the familiar and the curious.To some the combination of an avocado and chocolate may seem a bit at odds but to me it seemed like a perfect combination for a decedent mousse. And the moment we placed it inside a fluffy doughnut topped with confectinary sugar... well, it was heaven." Here's the recipe Hollowell used:

We got to test these out and it's important to note you will not taste the avocado flavor, which is a good thing. Overall the filling was pretty rich and had a mostly chocolate flavor to it... but for the hardcore chocolate and dairy lover it may be lacking, as it's missing the creamy element often associated with doughnut fillings like this. And the outer doughnut itself was superb, as always—Dun-Well has really perfected the non-cake-based vegan doughnut like no one else (though Cinnamon Snail is just about on par). 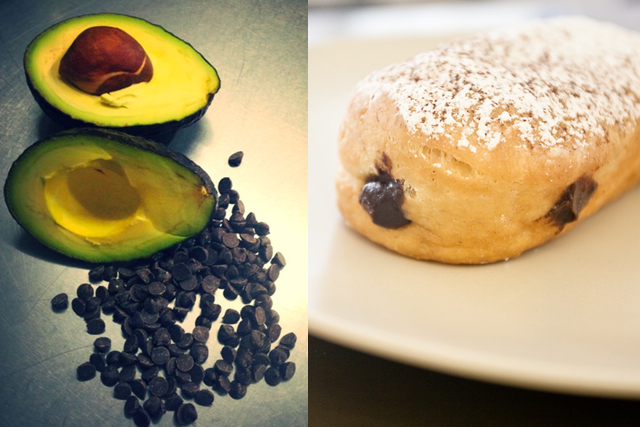 L: The filling getting made (Dun-Well); R: The finished product (Tien Mao/Gothamist)

So will avocado-based desserts be turning up on menus more often? They have made it into sweets before, but most often in the form of an ice cream or milkshake. As long as a ton of sugar isn't dumped into the mix, avocado-bases are better for you than the typical dessert fare—to echo Hollowell's earlier superfood sentiment, they're good for promoting heart health, preventing inflammation, regulating blood sugar levels, fighting cancer, and more.

#avocado
#desserts
#dunwell doughnuts
#trend alert
#original
Do you know the scoop? Comment below or Send us a Tip