New York and Los Angeles nightlife scenes have always been wildly distinct entities. They are by design, given the fact that clubs in Los Angeles have historically closed earlier, and the different layout of the city itself. But the two have always been in conversation with each other; fittingly, the unique disco ball now housed at the The Fleur Room, a nightclub opening Thursday night inside the Moxy Chelsea Hotel, typifies the historical (and ongoing) exchange between the two coastal cities' nightlife scenes.

The disco ball was once the center of the dance floor at Vertigo, a glitzy downtown '80s nightclub in Los Angeles that touted itself as the first "New York-style club" to come to the city—which, as The Los Angeles Times noted in 1986—was "a euphemism meaning not everyone is allowed to go in." For good measure, Vertigo recruited former Studio 54 bouncer Mark Benecke, who became notorious for not letting people into the short-lived, opulent club. On any given night, the likes of Jack Nicholson, Cher, and Susan Sarandon comingled at a table, while the late Harry Dean Stanton "[stared] into the middle distance," as The NY Times reported.

In the middle of it all lay this particular disco ball. Clocking in at over six feet high, with cylindrical cones jutting out of its face, the disco ball is, in 2019, housed at an Art Deco-esque club in New York. The way it's placed within the space makes it appear to be orbiting the Empire State Building, in a scene that wouldn't be too out of place in Batman. 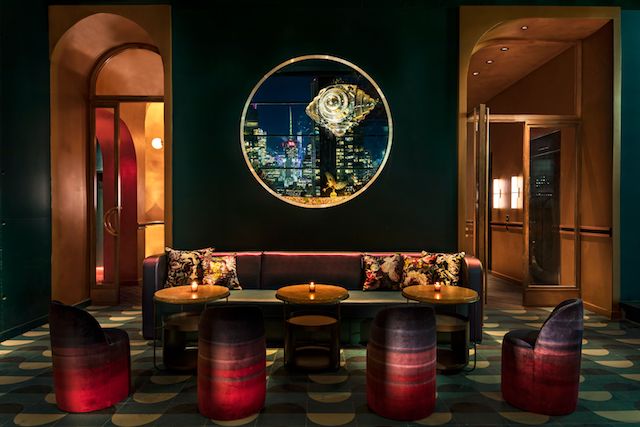 A reflection of the disco ball overlooking New York (Courtesy of Michael Kleinberg for Moxy Chelsea).

"Everyone who looks at it is like, 'Oh my god, is that from the future?'" says Angelo Bianchi, the Creative Director of The Fleur Room. "It’s almost an art piece more so than a disco ball, and it happens to also function as well." It spins the way a typical disco ball would, but has some pretty snazzy features, says Susan Nugruha, the director of design for TAO Group, which operates the club. "What’s cool about this is that it’s also kinetic. There’s five cylindrical cones...and each one of those, they all spin."

Not to mention that there are "lights that shoot out of it," Bianchi adds."We’re very fortunate to be the ones using it," he says. "Hopefully we’ll do right by its spirit in having it be the centerpiece of a really special, fun time here in New York."

The group found the intergalactic piece at Blackman Cruz, an antique store in Los Angeles. Over the phone, Adam Blackman, one of the co-founders of the store, confirms that the piece came from Vertigo. "What’s so interesting is that this was not a manufactured thing," he tells Gothamist. It was all handmade." Blackman says that ahead of the sale, he sent it to a repairman of his, who formerly worked in the aerospace industry, to get it up and working. It took months. "It’s a very, very complicated thing," he says. "Not only different motors in there...each turning half moon and then the whole thing moves and you have lights, it’s a whole mechanized nightmare."

Blackman says he bought the piece from a dealer in 2007, around when he bought the building that now houses Blackman Cruz (this space also used to be a nightclub: The storied gay club Probe, which appeared in American Gigolo). He isn't sure how said dealer came to own the disco ball after Vertigo closed, but if you have any insights as to how this disco ball made its way back, hit us up.