This Bushwick Chef Is Taking Bread Back To Its Roots. Literally. "When I look at the grain, I see the farmer," explains Kevin Adey, chef and owner of Bushwick's new homemade pasta haven Faro. "I'm looking backward, not forward." It's a cryptic message, that is until you see the kinds of raw materials Adey works with on his menu, like the grains he uses to mill his own flour and the half a pig that strolled through the door while he was talking with us. But with his newest dish, Adey is taking the origin story a step further, showcasing wheat in its simplest, most basic form, unadulterated by anything other than water and time.

Most of us are familiar with sprouted wheat as an ingredient in multigrain breads from health food stores, but when baked into a loaf, it's difficult to discern the subtly sweet, nutty characteristics of the small seedling that will eventually grow into wheat. "How do I not destroy this so we can really enjoy it?" Adey questioned, then answered his own query by explaining the basis of a forthcoming dish on the menu at Faro: Three Stages of Wheat Panzanella. 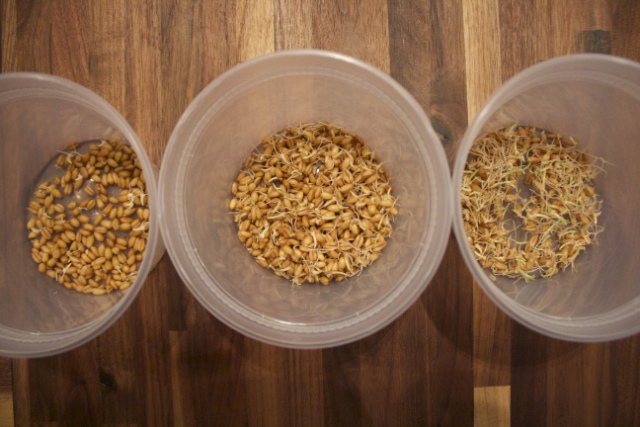 From three plastic containers, Adey shows us the stages, from mostly raw to iterations that have been soaking in water for a couple of days. For the salad, Adey will top fresh heirloom tomatoes with an onion pudding and minced cucumber then each of the three wheat stages laid out in a wheel around the plate. The sprouted wheat stands in for the traditional hunks of stale bread from which the salad gets its name. "If you're gonna care about growing wheat and where it's from, you should let people see it," he explains.

These days, there are plenty of chef's applying a nose-to-tail principal, one that Adey is familiar with from his time at Northeast Kingdom, but he insists the organic, sustainable ethos isn't one he wants to shove down anybody's throat. "When people see the menu, I want them to see food," he explains. "I'd rather have someone say, 'This tastes great' beyond just saying, 'This is organic.'" 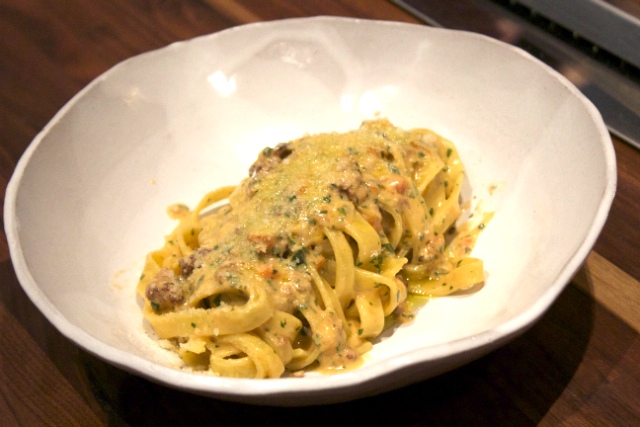 And it does taste great, especially the chef's manipulation of flours to create special pastas that are made at the restaurant daily. Of those, there's a grano arso—literally burnt grain—that's heavily toasted in the oven then mixed with untoasted grains and made into rigatoni. The smokey pasta gets an earth-flavored overload with morel mushroosm, charred spring onions and rosemary, as comforting a woodland dish as one can imagine.

Then there's the bolognese, which wraps itself around tagliatelle pasta that's the toothsome, platonic ideal of al dente. Pork shoulder gets browned "like the crusty part of a burger" in a frying pan, then gets mixed with vegetables, red wine, milk, cream, parmesan rind and parsley for an absurdly decadent yet refined take on the classic sauce. It's proof that all parties—from the pig to the grains to the herbs—died for a good cause.

#bushwick
#faro
#grains
#Kevin Adey
#original
Do you know the scoop? Comment below or Send us a Tip