This Avocado Panic Will Be Short-Lived, But The Guilt Will Last Longer

A sign posted recently at the Park Slope Food Coop reads, "Very important Avocado News: Please read. WE WILL RUN OUT OF AVOCADOS."

The warning from the Coop, which as you may know is an incredibly successful coop that has a history of internal strife and external parody, continues:

The industry is on its 13th day of little to no harvest, and today there is NO harvest. The strike continues, growers were trying to harvest up until today, have been physically disrupted. ALL of the roads in Uruapan Michoacan that lead to & from the packing districts are closed.

There is a complete stop in harvest, and this is not just the Certified fields, it is also now non-certified, and for the domestic market. All field trucks, and trucks with loads of avocados have been, and continue to be stopped and the trucks are left sitting in desolate lots. 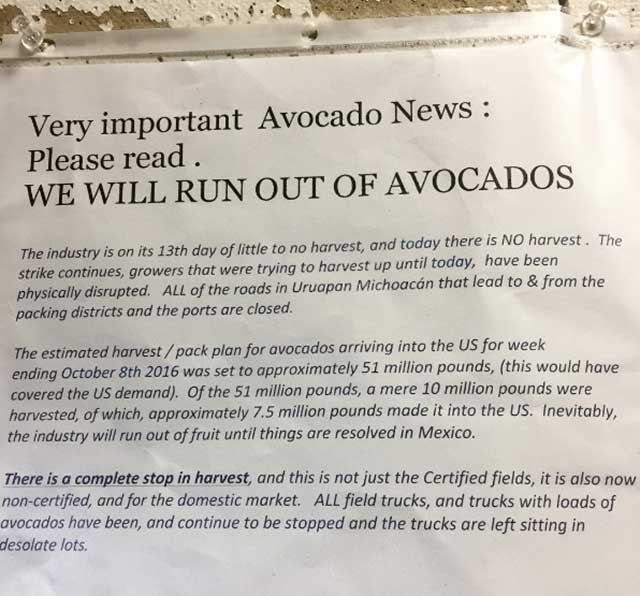 Seen at the Coop

It's actually not hyperbole—the strike has caused avocado prices to spike as well as shortages for some stores and restaurants.

A San Diego taco restaurant manager told CNBC last week, "We've been out of guacamole for four days now," and, on Friday, at the Upper West Side location of Nanoosh, my attempt to order an Avocado and Lentil salad was met with an apologetic, "We don't have any avocados! We've been trying to get them without any luck!" (Larger grocery and restaurant chains, like Chipotle, are more able to stabilize their precious avocado supply.)

The issue in part arises from a pay dispute between the avocado growers and the packers that has been brewing since the summer, with growers withholding harvest. A California grower and importer said, "Most of the growers in Mexico have wanted to harvest, but it’s been a small minority of growers that have wanted to exert this work stoppage. Of course it’s also hurting the workers, the harvesters, the people that do the packing and truck drivers going north."

Unfortunately a recent disruption of imports from Mexico resulted in lower volume shipments to the United States, creating a short gap in supply. The disruption was related to a dispute between growers and packers in Mexico which has been resolved. The good news is that the volume of shipments has quickly been restored. According to the Hass Avocado Board, shipments from Mexico during the week ending 10/25/2016 increased to more than 51 million pounds, an increase of more than 400% vs the prior week. It’s also important to note that Chilean imports are up 137% overall this year compared to last year.

It's unclear if the labor dispute was resolved in the growers' favor. Last week the Avocado Producers and Exporting Packers Association of Mexico (APEAM) issued a vague statement that "the interruption in harvesting was driven by internal industry issues that have been addressed with mediation by the Michoacán State Government and the Mexican Department of Agriculture (SAGARPA). The primary issue revolved around sales negotiations between the growers and packers."

The Hass Avocado Board spokesperson added, "Our industry strives to produce and deliver fresh avocados to U.S. consumers in a year-round basis. We are all working very hard to ensure all avocado lovers can continue to enjoy our fruit both at home and in their favorite restaurant."

The long-term outlook for avocado lovers is still not rosy: drought conditions mean that California's projected avocado harvest for next year will be 200,000,000 avocados—a seven-year low—and Americans' unstoppable desire has led Mexican farmers to cut down forests to grow avocados instead.