Our latest installment of Quick Bites brings us to two neighborhoods in Brooklyn for pizza of a certain geometric shape.

THE VIBES
It's been a shit year in general, obviously, but if you dig a little deeper, past all the deaths and nightmare politics and overall idiocy and look at, say, the state of square pizza in NYC, well...could 2016 in fact be the best year ever? Emmy Squared, which opened in the spring, is amazing; Scarr's on Orchard Street does a terrific Sicilian slice; and Dale Talde's brand-new Massoni is apparently firing up a square pie for the ages (I've only had a single slice here so far and it was delicious).

But wait—there's more! This past weekend I gorged on pizza-with-corners at two other new spots: Ops, a lovely little sit-down restaurant in deep Bushwick; and Brooklyn Pizza Crew, a classic NYC slice and pie joint in Crown Heights. 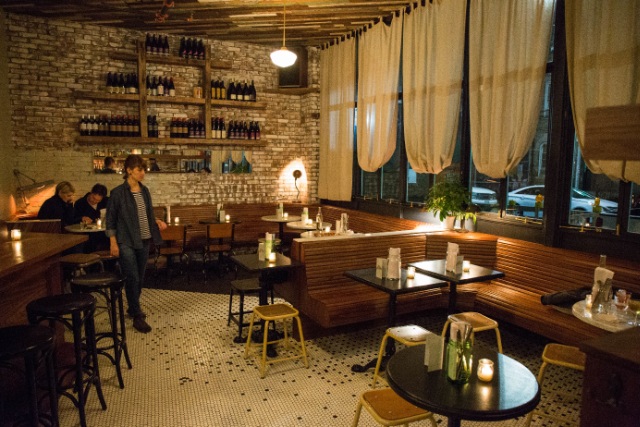 Ops is a chill, grown-up restaurant pouring natural wines, interesting beers, and cocktails with ingredients like fernet rinse. The space, basically a single room with a long, windowed front onto Himrod Street (it used to be a garage) is smartly divided into distinct areas by a winding, wooden banquette. There's a bar by the front door, and the sparking, mosiac-finished pizza oven dominates the open kitchen in the back.

A ceiling striped with wooden slats softens the white-tiled floor and heavy marble tables. The lighting is romantic, if dim—candles provide much of the wattage at your table—the service warm and helpful, and the music dominated by indie deep cuts and classic soul. Owners and chefs Mike Fadem, Marie Tribouilloy, and Gavin Compton come from places like Buvette, Estela, and Marlow & Sons, and their experience is evident in this smooth, professionally-run outfit. 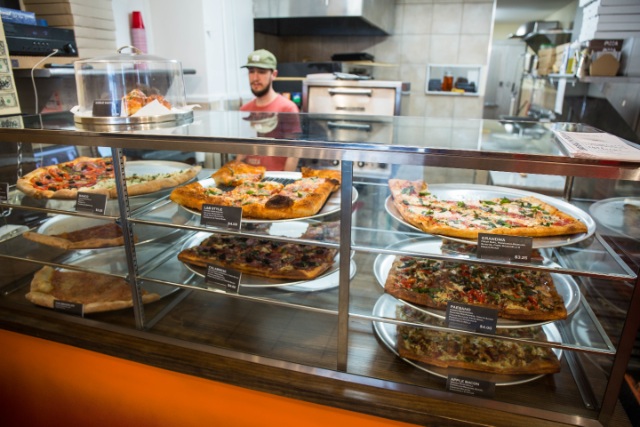 , on the other hand, slings its slices in familiar, comfortably casual surroundings. Order your pizza at the counter in back, grab a seat at any of the three communal tables, and wolf it down. An old-school, wild-style piece by graffiti artist Meres One covers the opposite wall of the narrow space.

This is the fourth (or fifth, depending on how you're counting) outpost of Nino Coniglio's Williamsburg Pizza empire, though with a somewhat different menu (fewer fancy-ass pies, plus a couple of Crown Heights exclusives) and its own dough-making operation onsite. Similar, but different.

THE BITES
The pies at Ops are mostly of the round, single-serving variety, and the one I had on Friday night, the Rojo, was very good. The crust here is made from sourdough, which gives it a pleasant tang, though it's also a bit more bready than what one usually encounters in a pizza. The toppings on the Rojo included a faintly gamy, thin-sliced mortadella, bits of a moderately spicy pepper, and a mild, melted crescenza cheese. 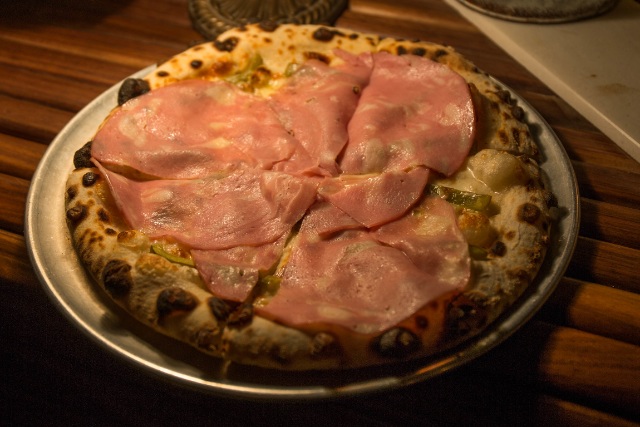 On my second visit to Ops I ordered the off-menu square pie, which was also quite good, the thick dough extra chewy (maybe a bit undercooked in parts) and finished with a trio of tomato sauce, mozzarella, and crumbled sausage. In both cases, when my server asked if I wanted a side of chili oil, I was glad I answered "yes."

There are three starters on the Ops menu so far, and both of the ones I tried—an antipasti of marinated mushrooms, roasted chicory on toast, and shredded celeriac; and a simply-dressed bitter green salad with beets—provided an excellent counterpoint to all the carbs.

Brooklyn Pizza Crew also sells regular round pies and triangular slices—the Pepperoni is a satisfying example of the classic NYC fold—but the real action here is in the Grandma square section. The thicker crust on these beauties achieves that sublime sponginess found in the best such slices in town, and the homage to Bensonhurst's legendary L&B Spumoni Gardens, called the L&B Style, is fantastic, a dense layer of well-balanced marinara (not too sweet, not too acidic) ladled on top of gooey mozzarella, with a hefty dose of sharp parmesan finishing things off. 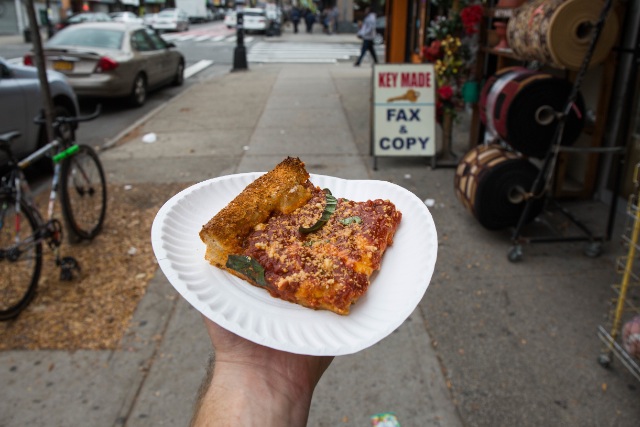 Other terrific squares await as well, including a mushroomy Paesano, a funky Calabrese, and an Apple Bacon slice that combines the smokey swine and tart fruit with mozzarella, crushed walnuts, and gorgonzola. A bottle of Boylan Black Cherry or Root Beer is my preferred way to wash down this sort of pizza feast, but a Mexican Coke does a fine job too.

THE VERDICT
In tough times, an embarrassment of pizza riches! Both Ops and Brooklyn Pizza Crew ably rise to their respective occasions, and the Grandmas at BPC are in the running for my favorite new slice in the city.

#brooklyn pizza crew
#bushwick
#Crown Heights
#ops
#pizza
#quick bites
#original
Do you know the scoop? Comment below or Send us a Tip