These Gorgeous New Pizzas In The East Village Are Completely Vegan It takes a daring individual to open any restaurant serving pizza in the hyper-critical pizza landscape of New York City and a particular kind of madman to open a vegan pizzeria at that. Yet that's just what restaurateur Matthew Kenney has done as of today, opening up 00+Co, where chef Scott Winegard will be turning out vegan pies from a wood-fired oven. Winegard trained in Naples and is employing the lauded 00 flour to make his crusts; "we're keeping with tradition to some extent," Winegard says. "So we don't upset the purists."

Tradition, insofar as pizza-making history goes, usually means a dairy-based cheese, which obviously won't be the case here. The restaurant is making its own nut-based cheeses from almonds and cashews, resulting in what Winegard describes as similar to farmer's cheese or ricotta. "It's not a cheese where you're going to be like, 'Oh my god, this is just like mozzarella,'" Winegard explains. "But it's definitely going to have a lot of flavor and you're definitely going to be reminded of what it's supposed to be." 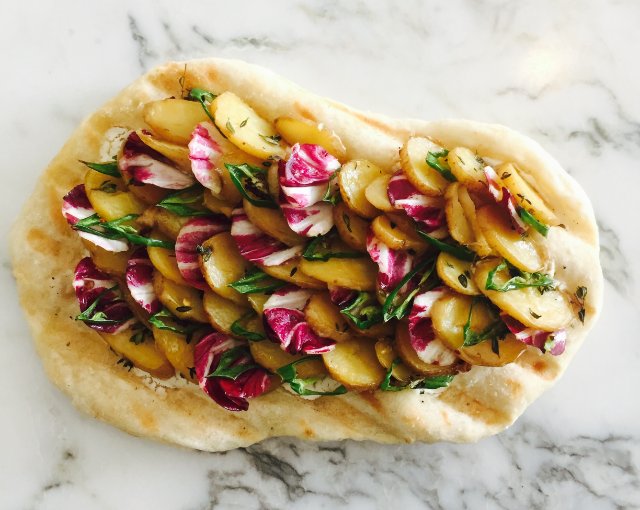 Winegard says his pies are similar to a Neapolitan style, but they certainly have their own unique character outside of their animal-free status. The pies are rustically-shaped but artistically topped, playing on the natural beauty of the ingredients. "Vegetables honestly just taste better, the flavors last longer," Winegard professes. "They're brighter, they're crisper, they're more vibrant, there's so much more color. There's so much vibrancy! I think it's more exciting."

A classic margarita-style pie with tomato, basil and cashew mozzarella ($15) will be on offer, as will a pie topped with a farro-fennel "sausage" ($18). None of the pies employ any faux-meat, but the restaurant is getting creative with mushrooms, marinating shiitakes in umeboshi vinegar, tamari and olive oil to imbue them with essence of "anchovy." They'll join potatoes, capers and baby kale in a pie bound together with almond cream ($16). The kitchen will turn out a selection of vegan small plates, too, and cheese plates of their house-made vegan cheese.

"I think that the people that predominantly eat plant-based are gonna be really excited about us and they’re gonna be our biggest champions to talk to other people that might not eat this way all the time," Winegard says, musing on where 00 + Co. will fit in amongst other pizzerias. "There’s going to be a real genuine interest in what we’re doing and how we do it and as long as we make a delicious product I think that’s really what we’re gonna stand on, just being delicious." 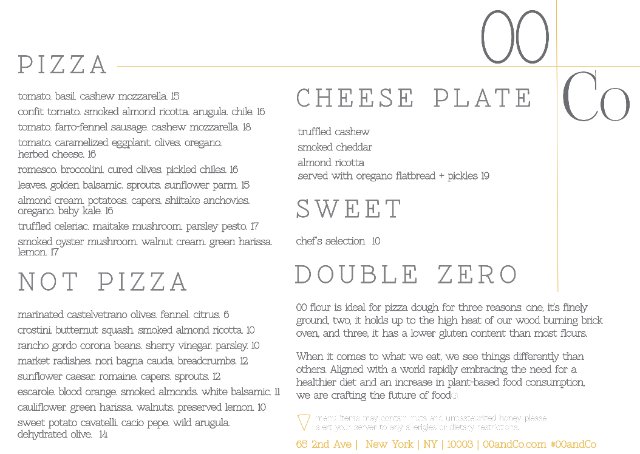 #00 and co
#matthew kenney
#pizza
#Scott Winegard
#vegan
#vegan pizza
#original
Do you know the scoop? Comment below or Send us a Tip
A new Gothamist is coming! We’ve moved comments over to our beta site. Click here to join the conversation and get a preview of our new website.