These Chocolate-Covered Japanese Potato Chips Might Actually Be Worth $17

There's $13 ice cream and now $17 potato chips and we'll eat our weight in double downs if they're not both worth spending your dwindling paychecks on. Like pretzels before them, potato chips are getting into the chocolate game, and we recently sampled a bag from Japan's Royce' confectionary, which has been producing chocolate products since the early '80s. Friends, the chocolate-covered potato chip is where it's at.

Royce' has actually been making a version of this product since 2002 but recently they created a different version using a dark chocolate they say adds a "bitter element" that contributes to a "more nuanced flavor." Sure, but you're not going to be thinking nuance when you're shoving fistfuls of these bad boys into your mouthhole rapid fire as your colleagues look on in horror (or is it jealously?).

The chips themselves aren't anything special, just a garden-variety ridged potato chip that's less Ruffles and more high school cafeteria potato product. But the salty, slightly oily chips actually work well to add more richness to confection so it's just not a slightly crunchy, slightly salty wafer of chocolate. As for the chocolate, Royce' gets the bitter part right, though it's not the dry-mouth inducing super high cacao stuff health food addicts are always "indulging" in squares of. There's plenty of sweetness, making the sinful combination pretty freaking addictive. 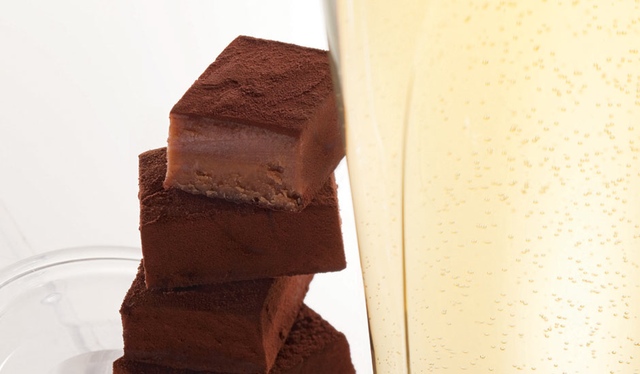 Though the lowbrow-type chips were our favorites, Royce' also does an exceedingly fine Champagne Nama ($18), a kind of truffle-like product make with Pierre Mignon Champagne. The square treats come dusted in cocoa powder, which conceals a rich, ganache-like filling that's creamy and sweet without being cloying. The dainty squares even come with their own serving utensil, which resembles a tiny shovel with which to break apart the squares.

Royce' operates three locations in New York City: the West Village, Bryant Park and their Flagship on Madison Avenue. Their bags of chocolate potato chips and squares of champagne-filled truffles aren't an everyday indulgence for everyone, but isn't that what Sugar Parents are for?

#chocolate
#chocolate covered potato chips
#royce'
Do you know the scoop? Comment below or Send us a Tip