These Are NYC's Noisiest Bars (Or The Bars With The Whiniest Neighbors?)

New York's hottest bar is Velvet Rope Lounge. It. Has. Everything. A human sized hookah. A giant cardboard bear. An NYPD power broker. And the top billing in a new list of the allegedly noisiest bars and clubs in the city.

Localize.city, a website for New York home buyers and renters, analyzed 311 calls from the past year, and developed an algorithm to find the noisiest bars and clubs in New York City, based on noise complaints. “Noise from bars and clubs is a nuisance many New Yorkers have said they wish they knew about before choosing their home” said Localize.city president Steve Kalifowitz in their post.

Localize looked at persistent problems, and ranked establishments by the number of days where complaints were filed, instead of just the total number of complaints. While the Velvet Rope Lounge was number one, it's the only Brighton Beach bar on the top 20 list. The top neighborhoods on the list are Williamsburg, the East Village, Bushwick, and the Upper East Side. However, since this list is based on 311 calls, which are curiously correlated with gentrification, the list might speak more about a changing neighborhood than a noisy bar. 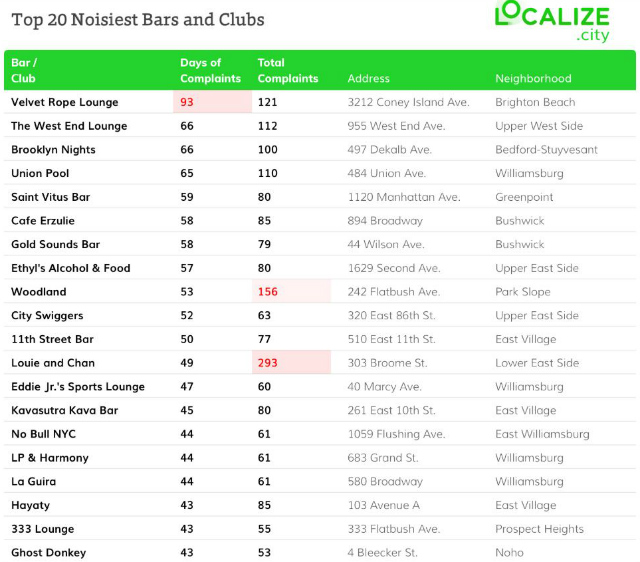 But the list does highlight bars that have some interesting histories. The Wall Street Journal revealed that the Upper West Side bar West End Lounge, number two on the list, was identified as a coffee shop on its liquor license application. The venue's manager, John Forslund, told the Journal that West End Lounge plays live music, has comedy, and is open until 4 a.m. The community board was encouraging residents to file complaints, said Forslund.

Brooklyn Nights in Bed-Stuy, number three, changed ownership in 2015. Dathan “Bobby” Jones, who used to work as a benefit advisor at Rikers Island, told DNAInfo in 2015 that he wanted to help formerly incarcerated individuals get jobs at the bar. He also wanted to use the space to host community events and toy drives.

But back in February, it was shut down in a state crackdown after three knife attacks were reported there, including one where a Queens district attorney staffer was slashed. It was also issued a $54,495 fine for operating without mandatory workers' compensation and disability benefits insurance. The most recent update, from February 16th, is that they would be closed for upgrades for 3 weeks.

Going down the list, what have we here at number four? Good old Union Pool in Williamsburg, widely known as a sexy good time hook-up bar with infamous "single" occupancy restrooms. Back in January, The Cut ran a profile of the bar.

[Zeb] Stewart, the founder, has a “scientific” theory for Union Pool’s success at bringing people together. “You have the front door, then you have the backyard. And you have this zone that’s kind of, like, private doors on the way out to the backyard — but basically you have to walk through that zone to go to the photo booth, to the bathrooms, to the pinball machine, to the taco trucks, you know, anywhere.” And so, he explains, “it creates all this natural movement where people are constantly, casually grazing by each other, holding the door open for each other, saying hello to each other, smiling at each other, and it mixes people up, makes them interact.” He’s aware of the bar’s reputation, he says. “I have friends who’ve met at Union Pool and gotten married. I’m sure we’ve also ruined some relationships.”

Number five on the list seems to be the most self-aware of the bunch. Saint Vitus Bar in Greenpoint is a heavy metal venue that opened in 2011. "Finally, Greenpoint has a real fucking ROCK BAR!" the owners confidently declared back then. Since then, while the venue has risen in fame, the neighborhood has changed. In 2016, the owners told The Village Voice that they added extra soundproofing "in preparation for new neighbors who might be inclined to file noise complaints." But clearly, Greenpoint 311 callers didn't get the memo.

It will be interesting to see if the city's Night Mayor, Ariel Palitz will have any response to this list. But don't count on it; Palitz used to be the owner of the now-shuttered Sutra nightclub in the East Village, considered one of New York's loudest bars.

"Within the first year of owning Sutra, we were actually nominated the Number One noisiest bar in New York and we have been at the top of that list for the past seven years on 311 calls,” she told the Lo-Down in 2012. “It was because we had the most relentless 311 caller, a single neighbor.”

#311
#bars
#clubs
#noise
#noise complaints
Do you know the scoop? Comment below or Send us a Tip
A new Gothamist is coming! We’ve moved comments over to our beta site. Click here to join the conversation and get a preview of our new website.