These Are NYC's Best Croissants

Croissants are one of the best food things, and perfect for an on-the-go snack in this, and any, city. You can eat it straight from the bag, or fancy on a plate, or even dunk it in your wine like we assume the French do. Below is a list of the best croissants in New York City, though please note that my metabolism is not what it used to be and I was unable to try every single croissant offered in the city, so please make recommendations in the comments. 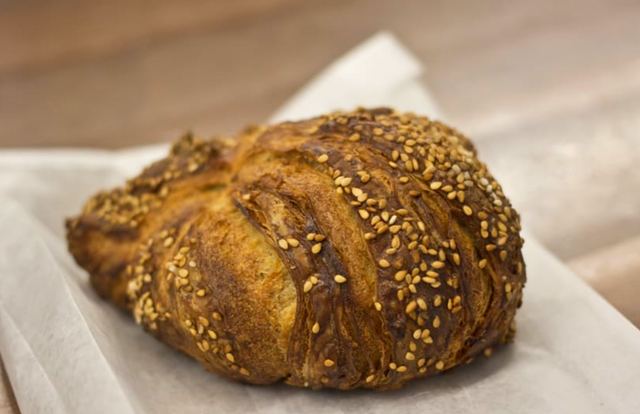 The pretzel croissant at City Bakery. (via Yelp)

PRETZEL CROISSANT @ CITY BAKERY: The pretzel croissant at City Bakery is a "destination croissant," one worth traveling for and centering your plans around. It will be the most important and delicious part of your day, and while you may think all pretzel croissants were created equally we are here to tell you they were not, sir. Accept no substitutions (unless it's Birdbath, which is the same croissant because they are owned by City Bakery). Tip: eat it straight out of the bag to avoid delicious crumbs getting all over you (and then tip the bag up when you're done and pour the crumbs into your mouth).

The City Bakery is everywhere; www.thecitybakery.com 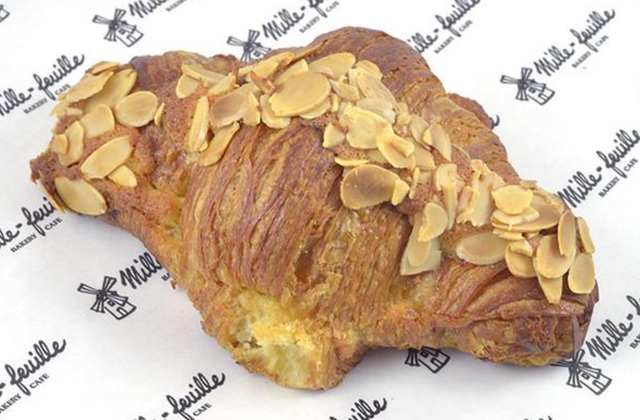 The Almond Croisssant at Mille-feuille, $3.95

ALMOND CROISSANT @ MILLE-FEUILLE: The almond croissant is an underrated croissant, but it is one of the best when done right. This means having a center that resembles the taste of marzipan, but with a much softer texture. Mille-Feuille, a family-run joint with French flair, does just about everything right, including their frangipane-filled almond croissant, which delivers on flavor while remaining light and airy.

Mille-feuille is located on the UWS and in Greenwich Village; find locations here 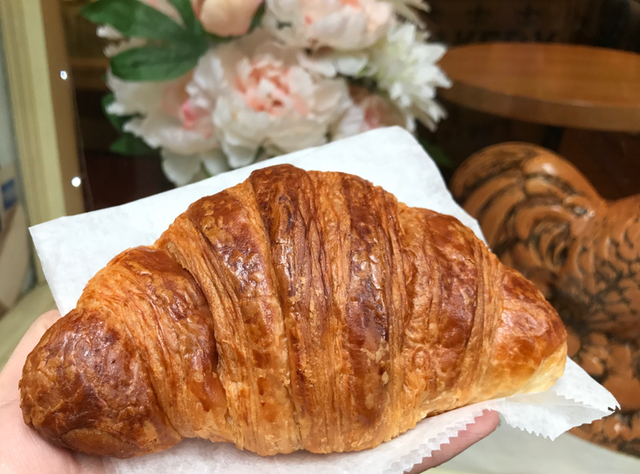 PLAIN CROISSANT @ PAIN D'EPICES: After many decades of personal research and numerous Viennoiserie-focused episodes of The Great British Bake Off, I feel very confident in saying that my neighborhood bakery, Pain d’Epices, has an excellent croissant. The crispy exterior gives you that satisfying crunch when you bite through while the interior is so ethereally buttery that you tell yourself you’ll definitely wake up early tomorrow to work it off. If you take a nibble as you leave the tiny storefront, you’ll taste how it’s both savory and sweet and then suddenly realize the entire croissant is gone by the time you walk to the end of the block. — Jen Chung 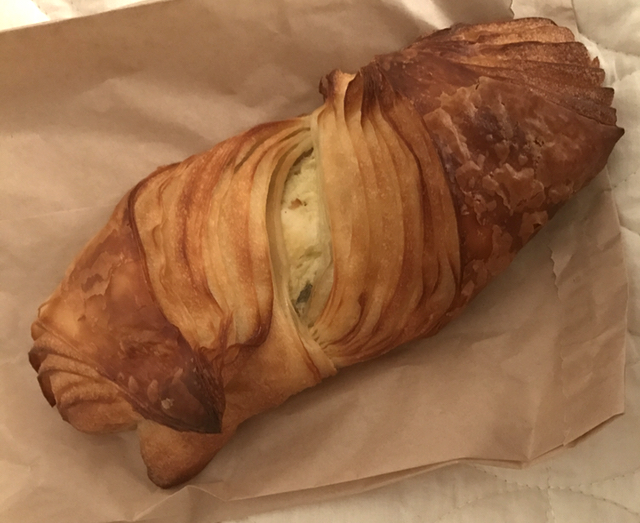 ARTICHOKE & GOAT CHEESE @ BIEN CUIT: Bien Cuit makes truly beautiful croissants, intricate in design and flavored with equal creativity. And the Brooklyn cafe's offering of an artichoke and goat cheese-stuffed croissant may just be their best—one fan wrote an entire essay about the menu item, a favorite among regulars. The dough is perfectly fresh and light; the filling is not overpowering, allowing for the croissant's natural flavor to come through; and the design is such that you can peel back layers one by one, if you prefer slowly picking at your pastries. 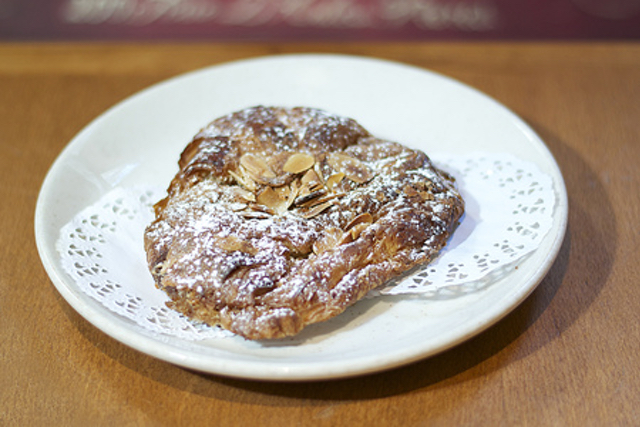 CHOCOLATE-ALMOND CROISSANT @ CECI CELA: Can the almond croissant be improved upon? We had our doubts, but Ceci Cela created a hybrid almond-chocolate croissant that will make your mouth water. It looks a little like a flattened danish, but it tastes like heaven. If heaven were an edible croissant, for some reason. 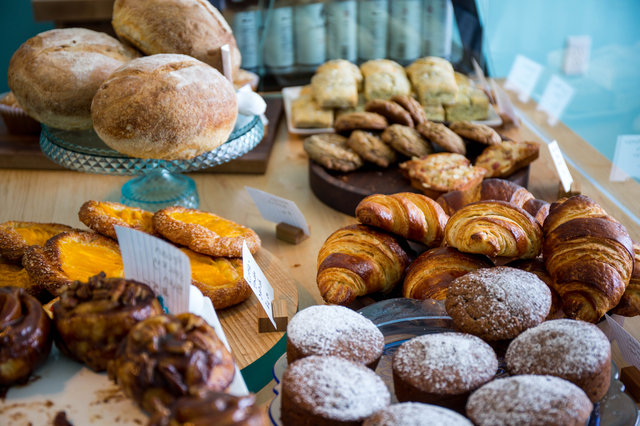 See that plain croissant over there at Rockaway Beach Bakery? (Scott Lynch/Gothamsit)

PLAIN CROISSANT @ ROCKAWAY BEACH BAKERY: One of the food highlights of Rockaway is the Rockaway Beach Bakery, where Tracy Obolsky serves up a whole bunch of creations, including a simple, plain, delicious croissant. Croissants are the best beach food—not too dense, and the crumbs can fall right into the sand. 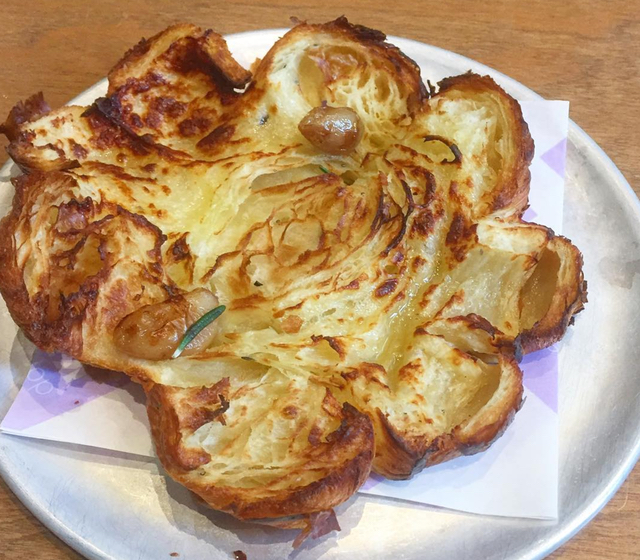 GARLIC BREAD CROISSANT @ DOMINIQUE ANSEL KITCHEN: You know why Dominique Ansel succeeded? Because he makes magic things like garlic bread croissants, with a little rosemary olive oil and "melty confit garlic cloves" that take the simple croissant to a whole new level. It's just a shame that he hasn't brought his Welsh Rarebit Croissant to the States (yet?).

#best croissants
#best of gothamist
#croissants
#original
Do you know the scoop? Comment below or Send us a Tip