There's Something Rotten at Time Warner 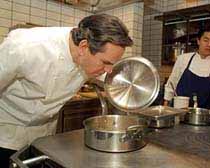 Don't blame yourself. Gothamist was fooled too. We thought the fancy-schmancy food court at the Time Warner Center was going to be the second coming. But with Thomas Keller's Per Se going up in smoke in its first week, Frank Bruni's one-star spanking of Jean-Georges Vongerichten's V Steakhouse, and openings for Charlie Trotter and Gray Kunz still months away at best, things are looking glum on the upper floors of the Columbus Circle über-mall.

New York Magazine this week is presenting a profile of a diner's dream going down the tubes. The chefs seem disgruntled; the developer is in denial. Half the restaurants can't get their doors open; the rest are struggling to break even. There is speculation that the whole Time Warner restaurant experiment was just a ploy to raise the prices of the condos on the complex's top floors (the penthouse went for a cool $40 million).

Gothamist isn't sure whether the self-styled "Restaurant Collection" is New York City's culinary Camelot or just a cynical real estate bait-and-switch marketing ploy, but either way it sounds more and more like these temples of haute cuisine won't be around for long. We're setting our autodialer for Per Se's reservations line -- (212) 823-9335 -- and just hope that the whole venture doesn't come crashing down before we're able to get a table.