There's A Whole Lotta Lobster To Eat This Weekend

Tom Yum Lobster Congee and Spicy Fried Chicken Salad are on the menu this weekend at Pinto Garden, which is launching their new Thai brunch in the West Village. Even more important: $20 for 1.5 hours of unlimited Lychee Bellinis or Classic Mimosas. In Williamsburg, it's a vegan brunch at Modern Love, with dishes including Seitan & Waffles, Tofu Rancheros and Challah French Toast.

Learn about whiskey, then drink some whiskey at the Kings County Distillery's The Spirited Pen event, part of a series where writers talk spirits while touring the facility. This Sunday, New York Times editor Clay Risen is on the docket, talking about his article "How America Learned to Love Whiskey" beginning at 5 p.m. The tour also includes tastings of four whiskies. Tickets $14. 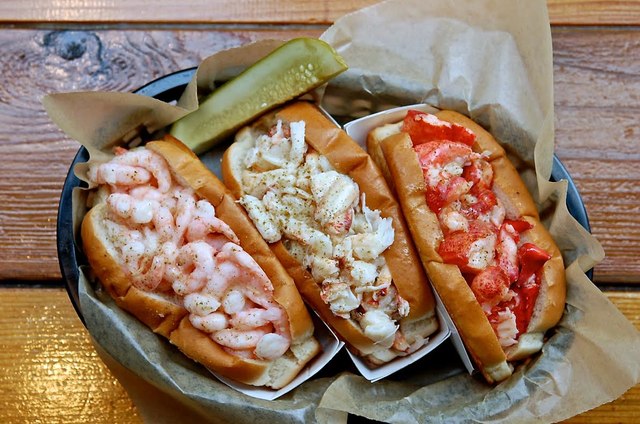 The NYC Food Truck Fest rolls into Grand Bazaar on the Upper West Side on Sunday, bringing a bevy of mobile food vendors into one belly-busting space. On the docket: Luke's Lobster, Souvlaki GR, Sweet Chili, Carl’s Steaks and eight other local food trucks. All of the proceeds from the day will be donated to four local public schools.

Eataly's fine dining restaurant Manzo is reimagining itself as a "butcher's restaurant," meaning they'll be closed 'til the end of the month. In the interim, Eataly is hosting a Sunday pop-up from noon til 7 p.m. with highlights from the previous Manzo menu and some peeks at some of the dishes from the forthcoming revamp. Make a reservation here and check out the menu here.