There's A Story Behind Every Mosaic At Greenwich Village's Peculier Pub

Some of the world's most whimsical artistic interpretations aren't found in the city's best museums but rather hidden inside a longtime Greenwich Village pub, where depictions from the Sistine Chapel, Edvard Munch's "The Scream," and van Gogh's "Starry Night" share space with antique beer cans and currency from across the globe. At Peculier Pub, the high art medium is the mosaic. Tiles upon tiles cover nearly every spare inch of wall space, even creeping up columns and spreading out over the ceiling. The bar's sense of interior design is every bit as eclectic as its beer list, which makes sense considering its self-proclaimed designation as the first beer bar in New York City.

Places like McSorley's and New Amsterdam both predate Peculier, but the second generation-run beer bar was still an early adopter of the craft beer movement in the United States. The owners, who wished to remain anonymous, found their calling working in a deli that specialized in hard-to-find imported beers (they were one of the first to carry the Chimay line in the '80s). From there, the couple opened a West 4th Street bar in 1982, followed by Peculier's current incarnation on Bleecker Street, where the pub has held court since 1987.

Peculier—named for Theakston Old Peculier, a family favorite—imported nearly 100 international beers in its first year, a designation that brought them lots of European tourists in the early days. Musicians and local students soon caught wind, bringing a rowdier crowd, which in turn brought in even larger numbers. Once demand grew and a larger space was acquired, the family was able to increase their stock, which topped out at 600 different beers, with between 300 and 350 available at any time. Most are bottles and cans—historic versions of which are also on view on the wall—but there are also 27 draft lines of mostly domestic beers, plus one tap always dedicated to a Belgian. 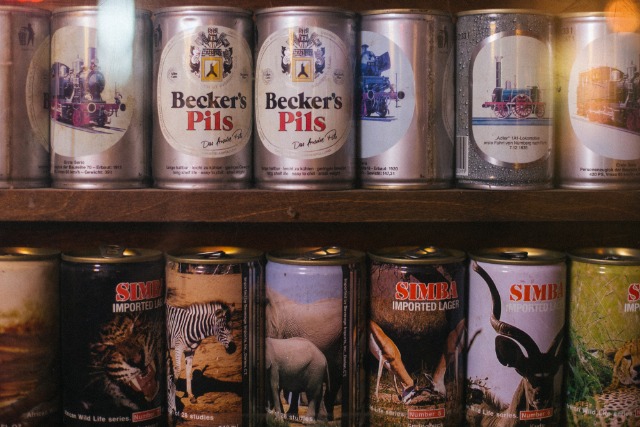 "It's just a bar to some people and to others, it's a craft beer bar," mused Ginger, the manager whose parents opened the bar. To that end, they're just as likely to pour a pint of Bud Light as they are to crack open a bottle of Mikkeller Brunch Weasel Stout from Denmark. That flexibility helps sate the rabid NYU crowd while accommodating the more selective beer drinker, many of whom are still crossing the threshold via another country. The tradition of serving foreign guests has even been acknowledged in a wall of currency, with colorful bills from Venezuela, Jamaica, New Zealand, Zimbabwe and dozens more.

But in a city rife with eclectic beer bars, it's the charming and lively bottle cap art that makes the pub stand out. A mosaic class attended by the family matriarch began the tradition, which also grew out of an abundance of bottle caps, many of which were originally saved to give to collectors. Ginger also reveals that Jim "The Mosaic Man" Power gave her parents pointers and inspired some of the works still glued to the walls; the pole art, a hallmark of Power's work, is some of the oldest in the space.

While the fine art homages are easiest to make out, they're but one part of the vast collection that has been amassed over the years—and is still very much a work in progress, even today. There are depictions of papyrus paintings inspired by Egypt and symbology and a Cleopatra-type figure, too. Some of the cutsier designs, including peace signs and moons, were Ginger's contributions as a young girl; others, like the equation for ozone, from her adult studies in chemistry. Chinese characters on the bar's doors spell out "happiness," according to Ginger. "We hope people leave happy—and not wasted!—and find happiness outside."