Update: Levain has to delay their opening. They will be open starting July 22nd.

Levain Bakery has been an Upper West Side hit for nearly 25 years now, beloved by locals right from the start for their monster-sized cookies and, once Instagram hit, a destination for food tourists from around the world. And though founders Connie McDonald and Pam Weeks have undergone a significant expansion of their operation in recent years, all three of their NYC outlets were a fairly tight-knit group, with the two UWS shops located within blocks of each other, and the third up in Harlem (a fourth outpost is on Montauk Highway in the Hamptons).

Starting this Wednesday though, McDonald and Weeks are bringing their amazing goodies into completely new territory, the Upper EAST Side, with a big and bright new shop on Third Avenue near 84th Street. To celebrate, they're giving away 100 free cookies, one per customer, from the time the doors open at 6 a.m. until they run out. Or, if you're not down for a Dark Chocolate Peanut Butter Chip for breakfast, the UES Levain will unveil a "secret," off-menu ice cream sandwich starting at 2 p.m., just in time for lunch dessert.

This latter treat is a magnificent beast, created from two three-ounce cookies (so, each is about half the size of one regular cookie) surrounding a custom-made "puck" of vanilla ice cream from Ample Hills. It's only available in Chocolate Chip Walnut and Dark Chocolate Chocolate Chip—I ate both flavors this week and they are exactly as delicious as you would expect. The ice cream supply is limited, so go as close to 2 p.m. as possible to avoid disappointment. Note: the $7 sandwiches will not be a regular menu item, making only periodic, Instagram-announced appearances throughout the year. 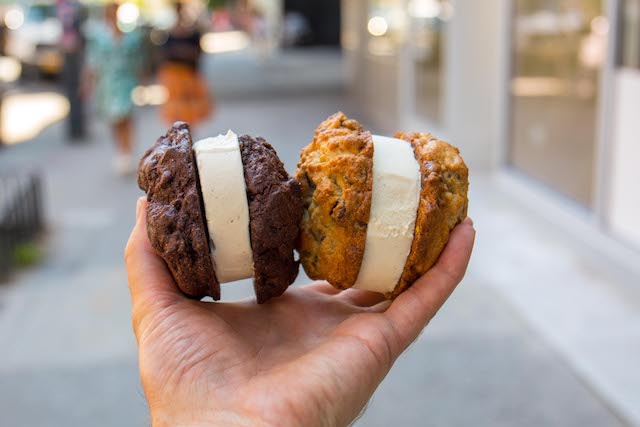 Of course, Levain offers a whole lot more than just cookies, and the UES bakery will be making McDonald and Weeks's complete menu of breads and pizzas, muffins and scones, brioche and loaf cakes. Don't miss the Levain Sticky Bun either, served on weekends only. There's a full line of coffee drinks available here as well, which offer a nice pairing to the sweet stuff.

Want some more good cookie news? Levain is opening a sixth store soon, in prime NoHo on Bleecker and Lafayette, so all of you downtown scenesters can get in on this action too.

The Upper East Side Levain is located at 1484 Third Avenue between 84th and 83rd Streets, and will be open daily from 6 a.m. to 9 p.m. (levainbakery.com)