There's A Roman Pizza Legend In SoHo, And He's Making Pies With Ice Even in Italy, a nation lousy with famed pizzaiolos, Stefano Callegari stands out, and not just because he's an outsized man with an ebullient personality. Born into a restaurant family, Callegari took a bit of a detour (15 years as a flight attendant) before opening his first pizza shop in 2005, in Rome. He rapidly built an empire on the foundation of his unusually light, crispy crusts and a menu of innovative pies based on classic pasta dishes. Along the way, he also invented the trapizzino, a wildly popular Roman street food. But it wasn't until last month that Callegari finally brought his game to NYC, with the opening of La Rossa on SoHo's eastern edge. I've been here four times already, and it is fantastic.

The signature Callegari pie is the Cacio e Pepe, which starts with four ice cubes placed atop an otherwise empty circle of dough. The pie is pushed back into the hottest part of the oven, the ice melting in time with the dough baking, until out comes a perfectly cooked crust, still a blank slate expect for a coating of boiling water. Handfuls of snowy Pecorino Romano are immediately dumped on top, so that the bottom layer of cheese turns hot and creamy, while the top remains dry and fluffy. A drizzle of oil and a few twists of the pepper mill complete the preparation. It's a marvel of technique, and an absolutely delicious way to eat a mountain of cheese.

Callegari isn't some one-trick pony, though, not by a long shot. As revelatory as the Cacio e Pepe pie is, his Carbonara pizza is probably even better, loaded with chunks of chewy guanciale, smears of soft scrambled egg, and shards of sharp cheese all sitting up on the crisp, airy crust. Want something a bit lighter? La Rossa's Margherita is an instant contender for the best such pie in town, thanks to the lovely mozzarella (courtesy of "Caseificio Ignazzi in Monopoli, Puglia") and, especially, to the astonishingly bright and lively San Marzano tomato sauce.

There are plenty of other pies on the menu as well, both familiar and less so—the Fiori e Alici, with two cheeses, zucchini flowers, and anchovies, was also a big winner at my table—as well as a trio of rice balls, a few salads, and some snackable "Oltre Pizze" dishes. For a minute there Callegari was slinging square slices during the daylight hours, but he recently halted production on those, citing a lack of space. "At my next restaurant in New York, they will be back," he promised. 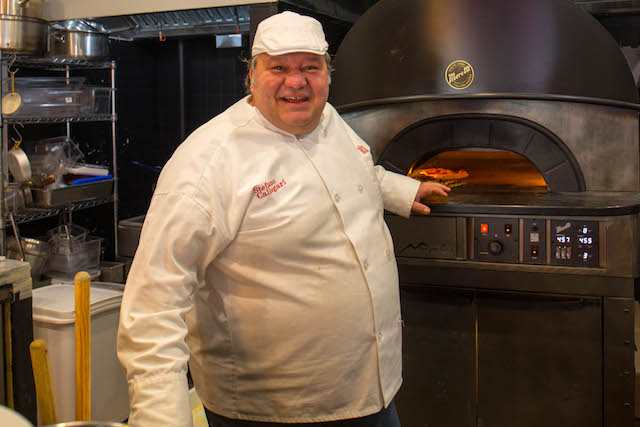 La Rossa seats about 25, and it's all comfortable and inviting. And unlike so many other restaurants nearby, it's not yet mobbed, which makes for a exceptionally pleasant SoHo/Nolita meal. Just a few blocks from the Angelika, too.

#la rossa
#nolita
#pizza
#soho
#original
Do you know the scoop? Comment below or Send us a Tip