This is the year of the viral hams. First came the resurgence of steamed hams. And now comes the watermelon smoked ham... which is not really a ham at all, the vegetarian dish just resembles one. ICYMI on Instagram, it's now being served up for $75 in NYC, but you'll need to put your name on the waiting list.

VOLUME UP 🔊🔊 Don’t let your eyes deceive you, this isn’t a steak! IT’S A WATERMELON 🥩🍉// This WATERMELON is smoked & cured for a few days over oak wood, just like a ham! Listen closely for that cracking sizzle and watch as this entire fruit is sliced tableside, only to reveal a juicy, bright pink interior, oozing with flavorful juices, and of course seeds 🤯 // 🎥 @duckseatery #foodbeast FOODBEAST

The dish comes from the mind of Will Horowitz, chef and owner of Duck's Eatery, and here's how he does it.

The watermelon's rind is removed, and then it's brined for four to six days with salt and ash (meaning it's covered in wood ash as part of the brining process). It's then smoked for six to eight hours and basted with its own pan drippings. The drippings are then mixed with buckwheat flour to form a gravy. The process removes nearly half the water from the melon. "It's explosive when you bite into it," Horowitz told Gothamist. He introduced the watermelon ham a month ago, and has received a flurry of press ever since. 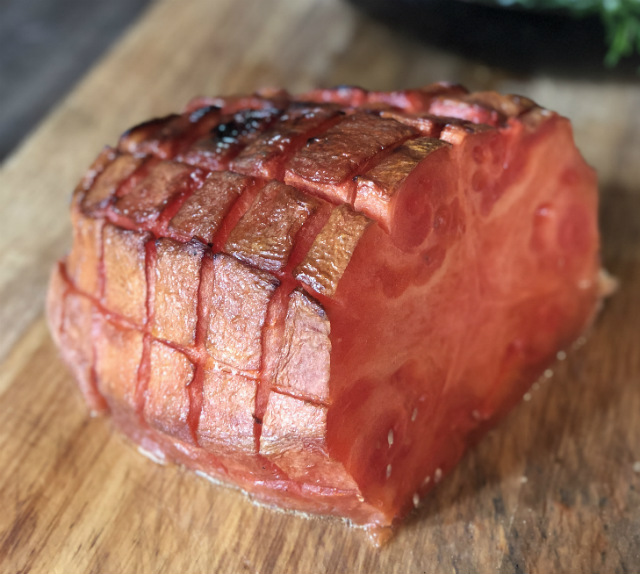 But Horowitz has plenty of experience meatifying melons and other pieces of produce. He told Gothamist that he has spent the last three to four years experimenting with curing, smoking, and aging fruits and vegetables. He introduced a cantolope burger on the menu in January, one that has convincingly tricked at least one customer into believing that he was eating a regular hamburger. In March, he entered the New York Charcuterie Masters competition with a smoked watermelon radish. "I told people it was a smoked rougarou," which, if you don't know is a legendary werewolf-like swamp monster in Louisiana. He was two votes away from winning the people's choice awards for his radish.

Horowitz sees smoked and cured fruits and vegetables as just the next step in their culinary evolution. Fish can be sold raw, as sushi, smoked, like lox, roasted, and many other ways. Why not do the same for melons? "It's OK to have all of theses things. [Watermelon ham] is never going to replace raw watermelon, because it's fucking delicious," Horowitz told us.

The $75 Whole Smoked Watermelon is available for preorder with a minimum of one week's notice. According to Horowitz, there is currently a waiting list for about a month, but there are cancellations.

#duck's eatery
#vegetarian
#watermelon
#watermelon ham
Do you know the scoop? Comment below or Send us a Tip