The backyard barbecue is a summertime tradition, one being played out with pork kalbi and ssam instead of burgers and dogs at Flushing's Majang Dong. If you can't read Korean, the nondescript storefront bears only the word "BBQ" to offer a clue about what's inside. To say nothing of the restaurant's large backyard space, where they're grilling up meats and seafood over hot charcoal. Luckily, Joe DiStefano visited the "Korean BBQ speakeasy," chronicling his meal on his blog Chopsticks + Marrow.

Enter the family-run restaurant and indicate you're interested in BBQ and someone will take you out back where the real action takes place. The year-round outdoor space—which is tented and heated in the winter—isn't like many of the sleek offerings elsewhere in the city. Plastic pink chairs are clustered around tables with inlaid grills for cooking, while alcohol advertisements emblazoned with attractive women adorn the walls of the covered section. 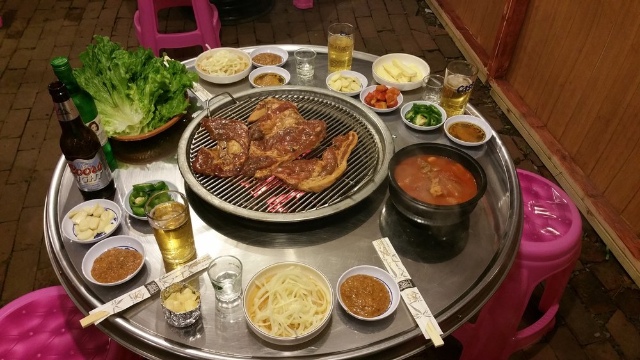 At the "Korean BBQ wonderland," DiStefano recommends that pork kalbi and pork belly, but says a must-have are the pork intestines. "With a crunchy exterior and chewy interior, the fatty rings eat like an offal lover’s version of pork cracklins," he writes of Chef-Owner Yu's dish. The dak ddong jjip, spicy fried chicken gizzards, are another favorite according to Time Out New York, along with jang uh gui, grilled eel.