There Are Free Sushi Burritos For The Grabbing This Weekend

Red Star Sandwich Shop on Smith Street celebrates its third anniversary with some cheap chicken and beer specials on Friday. Throughout the day, stop by for $3 Korean Fried, Buffalo, and General Tso chicken sandwiches, plus $3 sides and $3 beers to match.

Taste beers brewed in the apartments of your fellow New Yorkers this Saturday at the Americana: A Beer Festival put on by the Brewminaries homebrew club at The Well in Bushwick. On tap will be 32 homebrews all categorized as American styles, including American Wheat Beer, a Black IPA, North East Double IPA and a Wheatwine. Tickets ($40) include unlimited samples of the brews and 20% of the proceeds will be donated to the Cornell Cooperative Extension Hop Program, which ensures future brewers in New York State access to great hops by supporting the people that grow them. 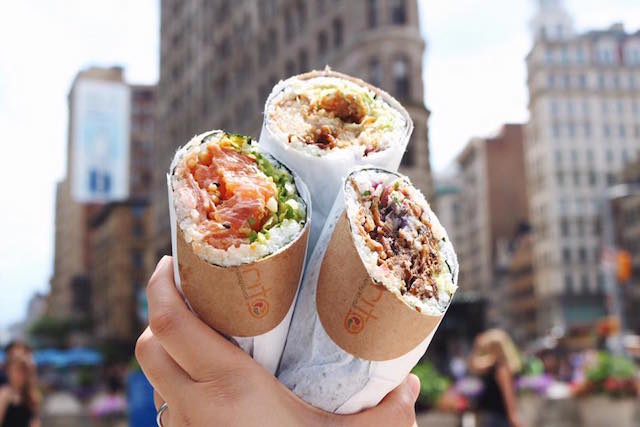 Marking the one year anniversary of Sushirrito's NYC location in the Flatiron means there's free food to be had on Sunday. The restaurant will be giving away grilled Kanpachi collars and snack-size versions of their popular sushi burritos, along with some drinks and shaved ice cream from Snowdays. From noon to 4 p.m. they'll be giving away baby burritos in Geisha's Kiss, Sumo Crunch, Caballero, and Buddha Belly flavors, alongside Hibiscus Yuzu, Horchata Genmai, and Passion Ume drinks. In the month of October, the shop will also donate $1 (with a minimum of $5,000) to City Harvest with the sale of any Sumo Crunch sushi burrito.

Get your cartons of milk ready because the Chile Pepper Festival returns to the Brooklyn Botanic Garden on Sunday with lots of spicy foods to wake up your palate. Nearly 50 food options will be on hand, including chile-filled ice creams, jams and pickles, hot sauces and chocolates, plus a pop-up from Sahadis Market called Sahadi's Souk. Cookbook signings, live music, gardening demos and other events are scheduled to take place during the event, which runs from 11 a.m. to 6 p.m.