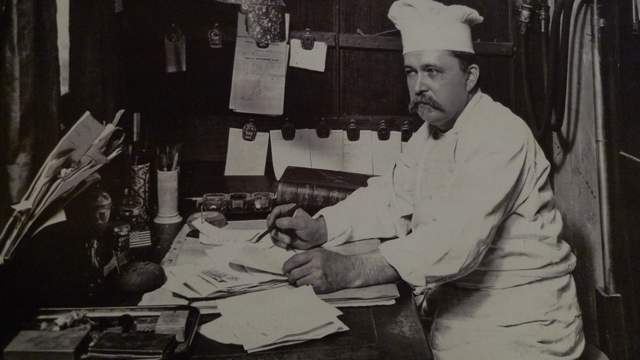 Delmonico's chef Charles Ranhofer, circa 1898, from Dining at Delmonico's.

Here's our big bad roundup of all our favorite, New York-centric (or otherwise notable) food books published this year:

Dining at Delmonico's: The Story of America's Oldest Restaurant, by Judith Choate, James Canora, and Steve Pool. (224 pp; $45) FiDi restaurant Delmonico's opened in 1837 and has been around since, just about inventing American Fine Dining in the process. Chef Charles Ranhofer (above) appears in one of the book's many historical photographs-- he's looking a bit lachrymose here, most likely because he just chopped like 9,000 onions to make a big batch of veal pie à la Dickens. Or maybe because he's living at the tail end of the 19th century and missed this whole Celebrity Chef thing by 100 years or so. Ranhofer was the first chef to put avocados on local menus and this town has never been the same. This is a jewel box of a book with old-fashioned recipes, all oversize with an embossed dust jacket and gloss. Bonus: As an institution, Delmonico's was an unlikely early adopter in the spread of evolutionary theory-- January 9 sees the release of Banquet at Delmonico's by Barry Werth, which details a dinner honoring Charles Darwin and Herbert Spencer at the end of Darwin's visit to America in 1882.

Urban Italian: Simple Recipes and True Stories from a Life in Food, by Andrew Carmellini and Gwen Hyman (320 pp; $35.00) Andrew Carmellini has worked all over and has many (perhaps uncomfortable and pointy) NY Times stars under his belt. His wife and co-author Gwen Hyman grew up not cooking much at all. Some boiled water, here and there, maybe. Urban Italian, which they wrote together in a small apartment kitchen, is one of the most all-around solid cookbooks you'll find: the instructions are clear and the recipes solid. Preview here; otherwise, the recipe for Escarole Calabrese on page 216 is so much better than you'll ever imagine (before you try it), and the accompanying photo on the next page is Carmellini's favorite in the whole book.

The Essential Cocktail: The Art of Mixing Perfect Drinks, by Dale DeGroff (272 pp; $35) Talk all you want about the current state of alcohol. Bartenders shouldn't be called mixologists, you say. Give me a Straight Up Nail and go to hell; stop lighting lemon peels on fire and growing annoying mustaches. But really, just as in the movie Highlander, there's a cosmic lineage of bartenders that defies the known boundaries of the space-time continuum. True bartenders are the Higgs Bosons of the foodservice world. Dale DeGroff is one such Higgs Boson, and this book is square one for someone who wants to learn how to make cocktails.

Baked: New Frontiers in Baking, by Matt Lewis and Renato Poliafito, with Tina Rupp (208 pp; $29.99) The folks from Red Hook bakery Baked (they've also just opened in Charleston) have published their first cookbook, and it's all about chocolate malt, butterscotch pudding tarts, red velvet cake made with red hots, bourbon chocolate pecan pie, Tuscaloosa Tollhouse pie, root beer bundt cake, and so on. Just do it. Last month, Baked shared their no-bake peanut butter pie recipe with us, and that was very nice of them.

The Complete Robuchon, by Joël Robuchon (832 pp; $35) Not to be confused with The Complete Robuchon by Desmond Tutu, or The Complete Robuchon by Marcia Gay Harden. Best cookbook bargain (at 832 pages), with absolutely no illustrations or photographs. None. Robuchon seemingly pads out page count like so: Hard Boiled Eggs, for example, are a completely separate recipe than Hard Boiled Eggs With Mayonnaise. The most unbelievable thing about this mammoth book is that it's actually an invaluable resource for novices and seasoned pros alike, and techniques are described clearly. Thoughtfully translated from the French by Robin H.R. Bellinger. You'll seriously want to bear-hug Robuchon next time you see him waiting on the Lazer Tag line at Chelsea Piers.

On The Line, by Eric Ripert, Christine Muhlke (240 pp; $35) Last month we interviewed Eric Ripert, and he spoke about how he played a food-styling role for a few of the photos that appear in his new book. Ripert sprayed salmon with Champagne in Le Bernardin's private dining room for a photo that appears on page 49, for example. On the Line is a day in the life of one of the most successful restaurants in New York City history. It has a few recipes, but it's also filled with Ripert's koan-like wisdom, doodles, recipes, and photography from inside the restaurant's kitchen.

Chanterelle; The Story and Recipes of a Restaurant Classic, by David Waltuck and Andrew Friedman (320 pp; $50) Essentially the chronicle of the TriBeCa restaurant, this book is filled with a lot of French-inflected David Waltuck classics (Brandade Fritters with Lemon-Saffron Aioli, for example), but it's also a historical document-- A little more than 28 years ago, two kids from the Bronx who had first met in high school (they started dating later) decided that they'd open a restaurant in New York City based on the food they mutually loved and wanted to cook. David and Karen Waltuck opened the original Chanterelle in a space on Grand Street that had originally been a corset factory showroom and a bodega. Their rent was originally $850 a month.

America Eats! On the Road With the WPA, by Pat Willard. (288 pp; $25.99) In 1935 the WPA commissioned Eudora Welty, Ralph Ellison, and Saul Bellow (among others) to document American food culture. The collected reports were editorially bungled, filed away, and never published; Brooklyn-based author Pat Willard has now collected a treasure trove of amazing material from the original project and tells its story well. Waterfall fishing trips, chitlins, crawfish boils, feasts in the field, fish fries, local chamber of commerce buffets, and barbecue tables that go on as far as the eye can see abound in the underrated book. With a few, scattered recipes, including one (frontier-style) for "A True Son-of-a-Gun Stew," made with beef tongue, tripe, brains, kidneys, hearts, and sweetbreads. A few vegetarian recipes are in there, too.

River Cottage Family Cookbook by Hugh Fearnley-Whittingstall and Fizz Carr (416 pp; $32.50) English cook Hugh Fearnley-Whittingstall's cookbooks are enormously influential for many New York chefs. Blue Hill's Dan Barber, for example, looks to the Fearnley-Whittingstall's River Cottage Meat Book: "I don't quite have a stained cookbook," he told the New York Times earlier this year, "but I have a go-to one that is a constant source of information and passion." The book surely has kid-friendly, "lick-the-spatula" theme and organization, but don't be deceived: its step-by-step instructions for everything from cooking steak to caramel, or making ice cream and bread make it a invaluable resource. This is a fantastic book for the food tot in your life who wants to embark on little Top Chef kitchen projects, but it's also good for anyone who ever wanted to figure out how to grow their own miniature vegetable garden at home, churn butter from cream in a glass jar, make jam from bruised fruit, or make their own salt from sea water.