So that happened. It seems like only yesterday we were having a good laugh about how the $175 burger with the gold leaf flakes at Wall Street Burger Shoppe made the $81 hamburger at The Old Homestead look like rancid dog food. Now all we care about is when the next 69 cent sandwich sale will go down at Swich. 2009 is going to be the year when we learn to cook! (That's where Danielle Sucher weekly recipes come in.) But before we elbow our way onto the rapidly-expanding bread line that is 2009, let's look back in hunger at some of the top food stories this year.

The Year of Hype: Chef David Chang (Momofuku) managed to both personify and earn the ever-increasing hype generated by myriad food blogs and Yelpers. His 12 seat Momofuku Ko, opened in March, is as maddeningly exclusive as it is egalitarian: reservations are allocated to VIPs and nobodies alike through the restaurant's website. It even stymied Times critic Frank Bruni , but when he finally snagged a stool his review was as rapturous as the others. This year Chang cemented his reputation as a chef's chef, and did so with an endearing lack of pretension and self-regard, even going so far as to admonish bloggers for photographing his food when they really ought to be eating it. 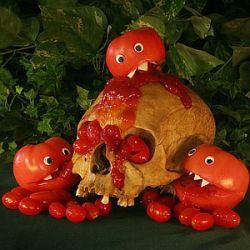 The Year of Fear: Remember that salmonella scare over the summer? At least 224 people were hospitalized, tomatoes were pulled from shelves, and tomato growers lost maybe $450 million. Which was too bad, because then the FDA exonerated tomatoes and fingered raw jalapenos. Oopsy!

The Year of Goodbyes: Beloved Meatpacking District oasis Florent closed in June after more than three decades serving this city's finest misfits. The vintage Cheyenne Diner also closed, but that's supposedly moving to Red Hook. In February La Fortuna, the Upper West Side cafe frequented by John Lennon, decided to let it be, and Park Slope's Tea Lounge on Seventh Avenue closed. Vesuvio Bakery in Soho also bid adieu, and in the space of just a few days we lost East Village coffeeshop Hopscotch (formerly Alt. Coffee), The Tasting Room, and Chez Brigitte. The former speakeasy Chumley's remained closed, and South Williamsburg BBQ joint Pies & Thighs went down and has yet to resurface, despite rumors of a new location. We know there are a lot more we missed, but this is getting really depressing. 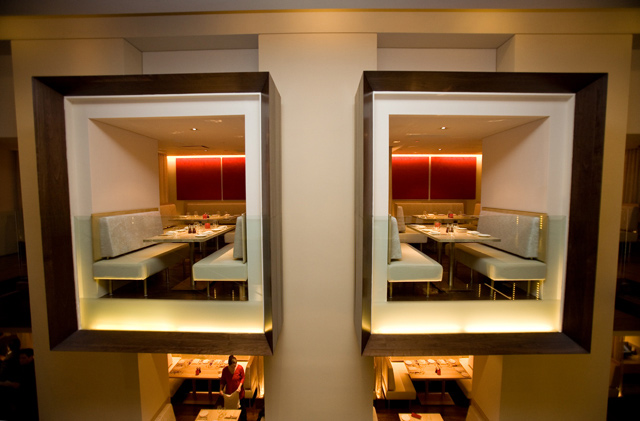 The Year of Hellos: One of the most striking disconnects in the New York dining world was the number of new, rather pricey restaurants that recently opened just as the economic meltdown began drowning everybody. It couldn't be helped of course; these ventures were planned well in advance. And at least they look pretty, so let's welcome gorgeous newcomers The John Dory, Rouge Tomate, Macao Trading Co., At Vermillion, the new Oak Room, Corton, 10 Downing, et al. Good luck with that!

In the meantime, we'll be spending our couch change at more modest new eateries, such as the new Caracas Arepas place in Williamsburg, Mercadito Cantina in the East Village, Shake Shack Upper West, and the new downstairs den menu at Bobo. But for special occasions, or when someone else is paying, we welcome the unpretentious warmth of Commerce, the haute-vegetarian at Dirt Candy and Broadway East, and the open-kitchen Italian at L'Artusi.

The Year of Cocktails: This Prohibition-era cocktail speakeasy trend has been intensifying for quite some time now, but this is the year it boiled over. To match new Manhattan haunts like Apotheke, White Star, PDT, and Macao Trading Co. (downstairs), Brooklyn got Hotel Delmano, Huckleberry Bar, The JakeWalk and Clover Club. In an attempt to ward off the tools, clandestine cocktail bar Milk and Honey went private, while Death & Co. managed to stay alive despite a Community Board out for blood. By the looks of things, we're going to need a lot more vests for all these mixologists—unless the market dries up for $12 for cocktails?

The Year of Trucks: From artisanal ice cream truck Van Leeuwen to the Endless Summer taco truck, it was a big year for trucks serving better-than average food on the street. The boom in mobile vittles was biggest in the dessert department, and Eater gleefully chronicled every battle in the "Dessert Truck Wars" between bitter rivals like Dessert Truck, Treats Truck, and Wafels & Dinges. With the economy tanking, the number of low-rent, mobile kitchens is sure to rise in 2009, hopefully culminating in a massive pie-throwing rumble by year's end.

The Year of Lawsuits: After a prolonged lawsuit, delivery workers for Saigon Grill, the Vietnamese restaurant with multiple Manhattan locations, won a $4.6 million class action lawsuit against the owners, who were charged with felonies earlier this month for falsifying business records and evidence tampering. After winning $36,000 in a lawsuit over ripped-off tips, servers at The Old Homestead Steakhouse sued their bosses again for harassment. Meatpacking district restaurant-lounge Buddha Bar owners were also sued for witholding servers' tips, as was Tom Colicchio's Craftbar. After pleading guilty to tax evasion, the Cipriani family managed to hold on to their liquor license, but SLA chairman Daniel Boyle has now accused an aide to Governor Paterson of leaning on him to vote for the license renewal. And just yesterday we learned that owners of Japanese sushi chain Haru are being sued by employees for not paying minimum wage and withholding tips!

The Year of Calories: This was the year we stopped drinking chai lattes, because the city finally succeeded in forcing everyone to take a long, hard look at what's going into our insatiable mouth-holes. The New York State Restaurant Association fought like hell with numerous appeals—even going so far as to frame their objections as a "freedom of speech" issue. The law requires chain restaurants operating in New York City to prominently display calorie information on all food and beverages, which has led to some unsettling discoveries and some awkward mix-ups, like when two different Dunkin Donuts in Penn Station listed wildly divergent calorie counts for their chocolate glazed donuts. Stay tuned in '09 for more lawsuits!

#calorie
#dining
#food
#new york
#nyc
#restaurant
#salmonella
#year end
Do you know the scoop? Comment below or Send us a Tip