Cookie Puss is undoubtedly the most famous ice cream cake character out there. The odd looking fellow with the cone nose and cookie eyes has been around for over four decades now, but what do we really know about him?

According to legend, Cookie Puss is actually a space alien, and was originally named "Celestial Person," or "C.P.," only later adopting his current moniker. We wanted to know the truth though—is Cookie Puss really from outer space? What's he like? For that, we turned to Carvel.

But I've heard Cookie Puss is really a space alien, is this correct? We can’t confirm nor deny. 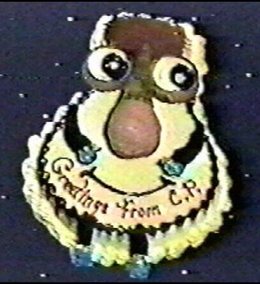 Photographic evidence that Cookie Puss is a space alien.
Before he was a cake, what did Cookie Puss do?

Previously, Mr. Puss worked as a test pilot for NASA, but quickly realized his tendency to melt under extreme pressure.

Interesting! So, is he the most popular ice cream cake for Carvel? Actually, no. Fudgie the Whale is the most popular. But there isn’t much rivalry there, just friendly competition at times.

Finally, the world wants to know, what's next for Cookie Puss? He is always making appearances at birthdays and celebrations. He'll also be visiting with his cousin Cookie O’Puss when he comes to town in March.

Later, Carvel finally admitted that Cookie Puss was a space alien, telling us that he resides on Planet Birthday, and is "known throughout the galaxy for his fun and quirky personality. Mr. Puss never sours and always brings a smile to the boys and girls of Planet Earth."

How does he travel from planet to planet? Cookie needs Flying Saucers to help him move about the galaxy.

What does Cookie Puss do for fun? A very friendly fellow, he enjoys visiting his buddies the Jetsons, watching his favorite movie Star Wars, and singing along to Elton John’s "Rocket Man."

At press time, Cookie Puss was not available to comment on his feelings about the Beastie Boys and their harassing prank calls of the early 1980s.

Hot tip: If you order a Cookie Puss (he costs around $30 these days), you can ask for extra crunchies!

#cake
#carvel
#cookie puss
#interview
#original
Do you know the scoop? Comment below or Send us a Tip