The Strange History Behind The 1800s Cheesiest Dish: Lobster Thermidor

Recently I was at a dinner where Lobster Thermidor was being served—I had never had it before, but oddly I had just learned about its origins, so anyone sitting within earshot of me at this dinner was treated to a Drunk History version of it. "It was like a marketing ploy!" I declared. "A foodvertisement for some play!"

First of all, Lobster Thermidor is rarely found on menus—it takes a lot of preparation—and when you do spot it, it's usually a bit pricey. Recipes vary, but most involve cheese and a cream sauce (mostly butter, cream, mustard, and sometimes even more cheese)—here's Julia Child's recipe, which of course includes all of those things. Another often-used main ingredient is brandy or cognac. 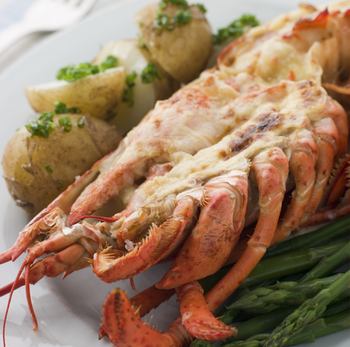 So, who thought to combine lobster with cheese in such a way? It was all about synergy.

Lobster Thermidor was introduced on January 24th, 1894 at Chez Marie, a well-known Paris restaurant. On that evening Victorien Sardou's play "Thermidor" had its first performance at the theatre called Comedie-Francais. Marie decided to launch his new dish by giving it the name of the play "Thermidor."

Whether or not those involved in the play were aware of the dish debuting on its opening night, or anyone at the theater asked Chez Marie to plan something like this, is unclear. But the dish lasted much longer than the play (which was named for the hot 11th month in the French Republican calendar)—it was cancelled after three performances. Americans never saw it, but it didn't take too long for Lobster Thermidor to reach the States—the NYPL's menu database has it showing up here around 1907. It appears to have been more common on menus in the earlier half of the 20th century. Here's a small snapshot showing some NYC establishments that served the dish:

Delmonico's no longer has it on their menu, but you can get their Lobster Newburg (which is slightly similar). That dish was actually invented first, and was added to their menu after it was first demonstrated to Charles Delmonico by Ben Wenburg in 1876. Presumably due to a fight with Wenburg, his dish was briefly taken off the menu. It's unclear if Thermidor started appearing on the menu during the time of this fight, as a substitute lobster offering for customers who kept trying to order the dish, but eventually Delmonico just decided to change the name from Lobster Wenburg to Newburg.

You can, of course, still find Thermidor around NYC, though it sometimes only turns up briefly on menus. Two places that almost always still have it are The Carlyle on the UES (for $60), and Le Philosophe in NoHO (for $36). If you ever find yourself ordering it, knock back some wine and tell your dinner companion(s) all about how it was invented to commemorate a Paris play opening, or whatever.

#history
#lobster
#lobster thermidor
#original
Do you know the scoop? Comment below or Send us a Tip