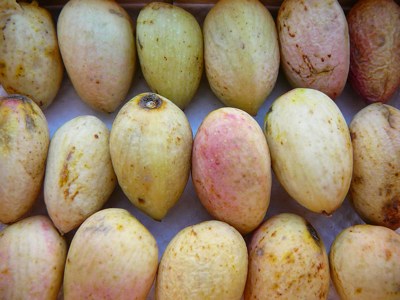 Save for a few ethnic markets in the outer boroughs, raw pistachios are a difficult food to source in NY. Because of occasional crop blights and problems with carcinogenic, fungal aflatoxins, imported fresh pistachios are subject to rigorous inspection and regulation; perhaps not a lot see this side of customs, and eventual retail sale. What does make its way to market has often been flown in literally under the radar. Raw pistachios have some other problems as well: apparently, the whirlwind of chemical reactions taking place within each ripening kernel can actually cause the pistachio to spontaneously combust when nuts are stored en masse. Seriously.

Toxic fungi and sudden explosions aside, the uncooked pistachio doesn’t really have an established role in American cooking. Raw pistachios are little green loners of the food world, and it’s a shame. Why? For starters, covered with a soft outer skin and a bit of peach fuzz, they’re beautiful to look at. Inside each translucent shell is the pale green kernel that is soft, sweet, and practically flakes apart. Raw pistachios are less bitter than their cooked counterparts; most have an almost creamy taste. Depending on factors like natural oil concentrations and the time since harvest, a fresh pistachio might also have an almost sappy finish, comparable to that of a pine nut.

Fresh pistachios can be made into vinaigrettes or pesto, and are generally workhorses of raw foods diets. On the cooked side of things, coarsely chopped pistachio "meat" can be used to crust pan-fried fish like halibut. Mixed with fresh cherries, thyme, and minced shallot, raw pistachios can be served as an accompaniment to grilled lamb or duck. At a small produce stall on Brooklyn’s Coney Island Avenue, where a small box of Iranian pistachios ($3.99 to $5.99 per pound) was displayed between a few crates of fresh dates, the man behind the counter recommended a small, icy glass of arak as the perfect pairing for a bowl of raw nuts. Arak refers to many types liquor produced in eastern Mediterranean countries, both commercially and homemade in small batches. While comparable to ouzo with its strong anise flavor, arak often pours like milky absinthe, and more often than that, has the strong funk of down home moonshine. In short, it’s a sort of dangerous drink, and a fantastic match for one of the very few raw foods in the world that might burst into flames without warning. If pistachio fire damage is your concern, you can beat the little suckers to the punch and roast them all you want with a little salt. Try 250° for an hour or so on a foil-lined sheet try.

#brooklyn
#coney island
#coney island avenue
#fire
#food
Do you know the scoop? Comment below or Send us a Tip