Since March of this year, a series of dinners have offered a platform for refugees from around the world to not only showcase the cuisines of their homelands, but also provide a vital source of income for a vulnerable population.

The Displaced Dinners series, conceptualized by Mazeish Grill owner Nasser Jab—himself part of a refugee family from Palestine—has put on over 40 dinners since its inception, connecting refugees from places like Syria, Russia and Central America with New Yorkers (and now folks in D.C.). The series, co-hosted by social food service Komeeda, has now expanded into the Refugee Food & Arts Festival, which will be timed to take place during the United Nations general assembly September 22nd through 24th.

"I would like to bring in a different crowd of people—I'm not talking about the community that's always doing non-profit or activist work or things like that. I'm trying to bring in people who want to learn more about the refugee crisis, who want to help out in some way, but are not necessarily active in their daily life in this kind of organization," Jab tells Gothamist. "Food is a way of bringing that up." 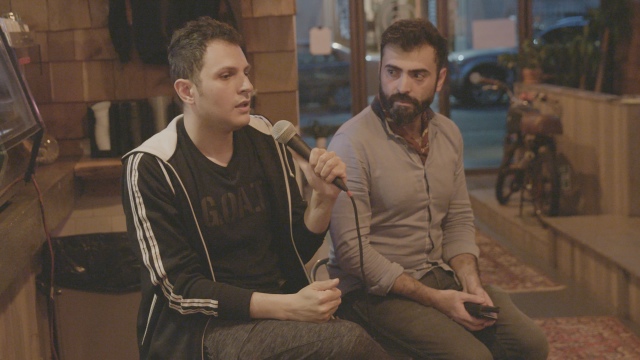 Lutfi, a refugee from Damascus, and Nasser talk to guests during a recent dinner (courtesy Displaced Dinners)

The three day festival—which will take place at The Food Arts Center @ FEDCAP, just a few blocks from the United Nations—will highlight the "chef-ugees" during cocktail parties, brunches, receptions and dinners. The meals will be cooked and hosted by refugees who've recently arrived in the United States and are looking for a job and a steady source of income. As is the case with the dinners, Jab hopes the festival will help connect refugees with people who can offer either guidance or resources for finding employment, if not an actual job.

In Jab's experience, refugees arriving in the United States enter into a system of finding employment that's unfamiliar to them, like applying for a job online or getting access to a computer to create a resume. Through the dinners, refugees have been able to connect with people who can help them with this process and get them working.

"The purpose of these dinners at the end of the day is finding [the refugees] people who can help them find jobs," Jab says. "Every dinner that happens we say, 'They're ready and able to work, here's their resume, who can hire them?' That's the main goal."

Individuals participating in the festival are compensated for their work—at the dinners, costs for food and supplies are covered and each refugee keeps whatever is left over. If the event sells out, Jab hopes he'll be able to pay each refugee between $1,000 and $2,000, depending on how heavily they are involved. 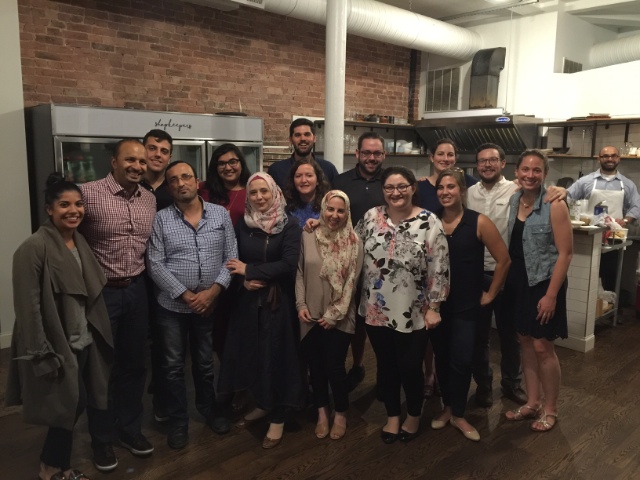 A group shot from a recent dinner (courtesy Displaced Dinners)

For attendees at both the dinners and the festival, Jab hopes it will not only be a delicious experience but an enlightening one as well.

"To be honest with you, the people who pay the heaviest price in the camps, and the people on the boats, and the people who didn't get resettled here, are people who are not politicized. They're just average people who have no one to save them, and by random chance some of them ended up here," Jab says. "The idea is that they have to put a name to the face. If something happens in France or Sweden or here, people get more motivated or more moved about it than if it happens in Iraq or Syria, because it seems that it's normal that people die in Iraq and in Syria. I would like to change that."

#Nasser Jab
#refugee food festval
#refugees
#syrian refugees
#original
Do you know the scoop? Comment below or Send us a Tip
A new Gothamist is coming! We’ve moved comments over to our beta site. Click here to join the conversation and get a preview of our new website.