After a wildly successful inaugural season last year, the Queens International Night Market is back: more than 80 vendors will pack the parking lot of the New York Hall of Science tonight for the kickoff of the market's second season.

The market is the brainchild of John Wang, whose initial vision for the market featured 100 vendors, including food, art, and merchandise, not to mention musical performances spanning the city's "rich cultural and ethnic diversity." The market's first iteration was smaller than Wang's original plan, with about 25 food vendors, but its opening evening saw thousands of New Yorkers, who braved long lines and parking debacles in order to taste octopus-stuffed takoyaki, griddled noodles, squid skewers, roti stuffed with meat and eggs, and more.

The market grew exponentially last summer, at one point hitting 100 vendors on one night, and this season, the market has doubled its original size: over 50 food vendors will be serving up treats such as duck and pork buns, french toast sandwiches, Korean corn dogs, and okonomiyaki. Wang told us in January that they'll try to keep the food vendors at around 50 this year: "From my experience, if there are more than that, it's kind of a paralysis of options for the visitors. And, of course, capping the number of food stalls is better for the food vendors that are participating."

There will also be some three dozen vendors selling crafts and other merchandise, and the inaugural night will feature six performances, from alternative rock to violin and dance storytelling. Throughout the night, The Haiku Guys will be offering free, personalized haikus to market-goers. Check out the full list of offerings below: 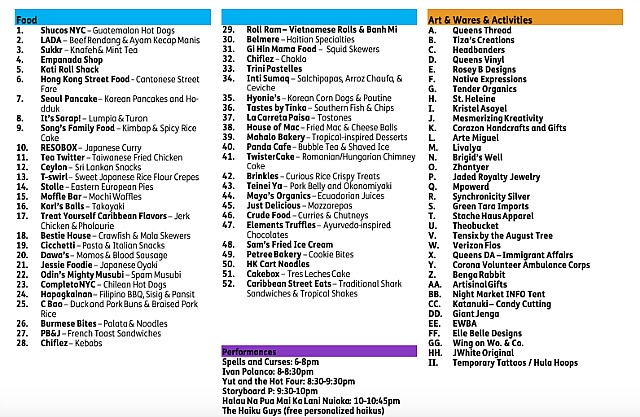 From the beginning, Wang has emphasized diversity, affordability, and accessibility. Accordingly, he'll be sticking this year to the $5 price cap for food vendors, and hopes that the sheer volume of people patronizing the market will drive profits. Last year, all but a couple vendors broke even, Wang told QNSMADE recently.

The market is currently scheduled to open every Saturday from 6 p.m. to midnight until August 20th, at the New York Hall of Science in Flushing Meadows Corona Park, Queens. They're expecting long lines and big crowds at tonight's inaugural event, so come prepared—or, check out the market any Saturday night in the next few months.