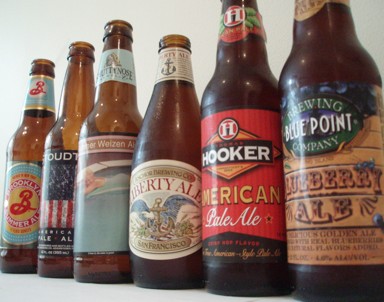 A fact for you: the average American lives within ten miles of a craft brewery.

That’s right, only ten itsy, bitsy miles separate us from the artistry and craftsmanship of fermentation. As New Yorkers we are particularly lucky, with about 20 breweries in the city and surrounding neighborhoods. That basically means that there is no excuse for downing Coors Light, unless beer pong is involved, of course. This little nugget of information is particularly relevant this July, as we celebrate American Beer Month.

Clearly, this cleaver marketing ploy is way to bring awareness to some of the great American Craft Breweries that may get overshadowed by their European cousins. Don't feel sorry for this underdog just yet, however. If our nationwide beer-bellies say anything about us, it’s that we know a thing or two about beer, and perhaps anything deep-fried, but mostly beer. To do our part in celebrating this worthy cause we put together the “Gothamist Great American 6 – pack of refreshingly tasty, easy to drink, thirst quenching, frothy beer”….available at your local bodega.

Thomas Hooker, American Pale Ale, Connecticut
We didn’t just pick this beer so we could say there is a Hooker in the collection, but we’re kind of glad it worked out that way. We’ll refrain from makes jokes about how easy this beer goes down, but let’s just say it was worth the $2 it cost us.

Brooklyn Brewery, Summer Ale, New York
We’d be foolish if we didn’t include the great brewery right in our backyard in this collection. Garrett Oliver, the Brewmaster at Brooklyn Brewery, exercises his mad skills in this Summer Ale that’s spicy, smooth and with just a little attitude.

Smuttynose Brewing Co., Summer Weizen, New Hampshire
This crisp Weizen looks as great as it tastes. With layers of flavor and personality this is the perfect beer to sip on the boardwalk at Coney Island, to wash down a few dogs from Nathan’s. You should probably brown bag it.

Blue Point Brewery, Blueberry Ale, New York
It was the guy at the bar with the gray bushy mustache and Fat Max tape measure that said it best, “I don’t like no fruit in my beer.” However, we always make exceptions for delicious. The hint of blueberry in this beer is subtle and serves as a great complement to the toasty, yeasty notes.

Stoudt’s, American Pale Ale, Pennsylvania
This beer is rich and smooth and with a hint of chocolate that lingers just the right amount.

Anchor Liberty Ale, California
Perhaps we have been too east coast dominate in our selections, but this beer from the west side has no problem holding its own. The great hop flavors and aromas intermingle with notes of orange and citrus in this balanced, well-crafted ale.

This should hold us over for the first week or so of American Beer Month. While it would be impossible to raise a glass to all the great breweries in the United States – like the Free State Brewery in Kansas or the Abita Brewery in New Orleans – we will do our part to make our way through the ones in our city. Who wants in? Stay tuned for the tour…

#As
#As New Yorkers
#beer
#bodega
#brooklyn
#brooklyn brewery
#Coors Light
#garrett oliver
#gothamist
#Great American
#Neighborhoods
#new york
#new yorkers
#Pale Ale
#summer
#the city
Do you know the scoop? Comment below or Send us a Tip
A new Gothamist is coming! We’ve moved comments over to our beta site. Click here to join the conversation and get a preview of our new website.