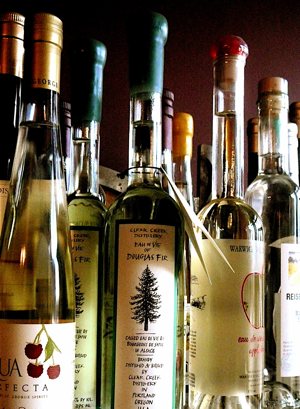 With street-side Christmas trees going for more each year and the average apartment size decreasing, we propose the adoption of a new holiday standard: Enjoy your Christmas Tree in a highball glass. To wit: Clear Creek Distillery’s Eau de Vie of Douglas Fir, 375 milliliters of pine flavored brandy, found at Red Hook booze and esoteric spirits emporium LeNell’s. This small, $45 bottle is cheaper and has a lesser environmental impact than deforestation, and will definitely last longer than most trees (at least if used sparingly). Made in Oregon from the actual buds of Douglas Fir trees, the Eau de Vie has a faint green color that’s not surprisingly “all natural.” Sample cocktail: Substitute some Douglas Fir brandy for half the amount of rum called for in a traditional mojito recipe. Keep the mint and the lime, and call it a Tannenbaum. Start a new household tradition today, but enjoy responsibly – this tree could burn your liver down.

In-store events at LeNell’s remain a draw for those unallured by pine-scented liquor, and this Saturday from 7-9 PM is a bonzana of classic cocktails from Mixologist David Wondrich, who will be signing copies of his new book, Imbibe!: From Absinthe Cocktail to Whiskey Smash, A Salute in Stories and Drinks to "Professor" Jerry Thomas, Pioneer of the American Bar. Jerry Thomas is considered by some to be the father of the modern mixed drink, so in his honor, Wondrich will be making Blue Blazers and serving Tom & Jerrys “from an antique punch bowl.” Glug, glug, glug.

While we’re at it, after the jump you'll find a new cocktail recipe LeNell developed for the lounge menu at P.D.T., the “secret” annex of Crif Dogs on St. Mark’s Place. Because P.D.T. stands for Please Don’t Tell, publishing this recipe sort of feels wrong, really wrong. But maybe it’s just the whole bump and grind of this drink: Containing a couple of aphrodisiacs, LeNell says the following recipe was inspired by Mae West.

Shake all ingredients except for sugar and champagne, at first without ice. The mix should emulsify. Add ice, shake again (at least for 30 seconds). Strain into “hot sugar” rimmed glass (rim using a grapefruit slice); top with champagne. Garnish with a couple of bourbon soaked goji berries impaled on a toothpick.