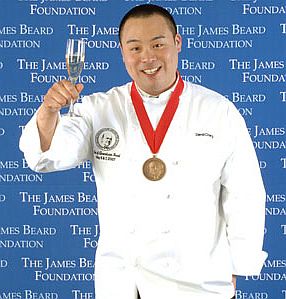 With a sprawling New Yorker profile coming on the heels of the opening of his 12-seat Momofuku Ko in the East Village, chef and restaurateur David Chang is having a very good March. But judging from the 8,000-plus word profile, the man is still totally miserable, just like most people in the restaurant industry. The article is not online, but Eater has been posting the juiciest parts.

The profile finds the 30-year-old award winning chef cracking up under the stress of managing multiple, insanely popular restaurants. His doctor even diagnosed him with shingles, brought on by his high anxiety. He tells reporter Larissa MacFarquhar:

It’s not that I'm not happy; I'm just fearful for the future. I'm fearful that everything's gonna be taken away… I’m a total head case right now, I cannot keep this up. All I want to do is fucking move to Idaho and ski and fish and read books. All I want to do is run away and stop… No one gets angry like I get angry. I just turn into a complete maniac. My brain feels like it’s gonna explode. It takes me a day to recover—I have to lie down and put ice on my head.

And one of the main reasons why the intimate Momofuko Ko has the cooks serving diners as they sit around the kitchen counter is because Chang is fed up with servers making more money than the cooks: “Servers are such greedy bastards. A server at Ssäm Bar could bring in seventeen hundred dollars in a week working thirty-two hours; a cook working the same hours would earn three hundred and fifty.” Too true, and the way Chang berates his cooks, they definitely deserve more money. Here’s how his head explodes on the staff:

I question your integrity. Are you willing to fucking sacrifice yourself for the food? But for personal integrity as a cook, this is what we do, and I don’t think you guys fucking care enough. It takes those little things, the properly cut scallions, to set us apart from Uno’s and McDonald’s.

But he shows no intention of running away to Idaho; plans for a Vegas restaurant are reportedly in the works.

#chef
#david chang
#momofuku ko
#New Yorker profile
#restaurant
Do you know the scoop? Comment below or Send us a Tip