Today begins the era of the ChickenShack, Shake Shack's first foray into sandwiches that (formerly) clucked. The Brooklyn-only sandwich—that's some borough othering, SS!—went live at 11 a.m. and I headed over to the DUMBO location to try it. Things were calm at the 11 a.m. opening. So calm, in fact, that Shake Shack team members were in Peak Hype Mode trying to drum up excitement over the new sandwich. One guy gave me a high five so hard my hands hurt for several minutes. Respect.

Besides overly enthusiastic team members, there are signs for the sandwich...everywhere. At the front of the lines, on the menu, multiple signs at the registers. If someone practically screaming in your face didn't clue you in, the deluge of signage will. And after you order said sandwich, someone will also tell you that there's a survey about the sandwich at the bottom of your receipt. Or, you can wait for a team member bearing an iPad to circle your table while you eat and prompt you for your opinions as you chew the final bite.

Bottom line: they're excited about the sandwich and frankly, they should be, as they've got something really great on their hands (and in my belly). In direct contrast to the bun-eclipsing chicken from Fuku, the plump breast neatly occupies the boundaries of the potato bun, ensuring even chicken distribution. Said breast comes encapsulated in a crunchy, peppery crust that's heavy on the golden brown characteristics. Inside, juicy breast meat, perhaps the result of a brining process behind the scenes. 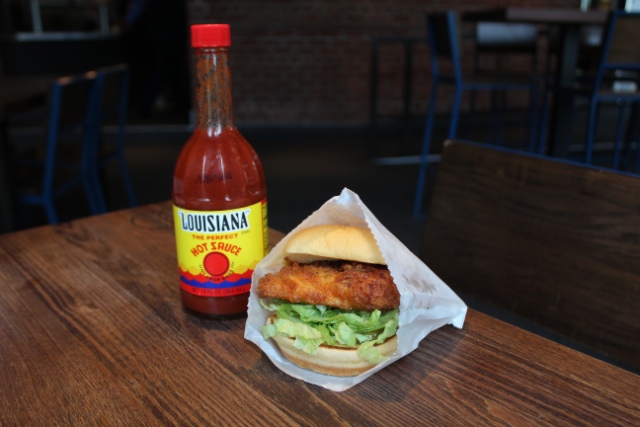 As far as comparisons to traditional fast food go, this sandwich most closely resembles the Crispy Chicken Sandwich from McDonald's, but with a few key differences. First, Shake Shack goes with shredded lettuce over the full leaf, which means more even distribution of greenery. Second, their mayo component is redolent with herbs like thyme, parsley and perhaps some dill, adding a cool, ranch-like flavor to the sandwich.

Pickles, too, add great crunch and a little bit more moisture to each bite. And finally, there are no tomatoes, which some may say is an abomination but in my opinion the addition of tomato would have sent the sandwich into soggy territory. You're better off without it.

Some other important things to note: