Today the National Hot Dog and Sausage Council launched a bracket to determine the Official Hot Dog Condiment Champion. Their bracket separates wet and dry condiments, but in the end there will only be one winner of these 16 competitors: sauerkraut, ketchup, mustard, cole slaw, chili, BBQ sauce, mayonnaise, onions, cheese, tomatoes, sweet peppers, hot peppers, bacon, pickles and pulled pork. 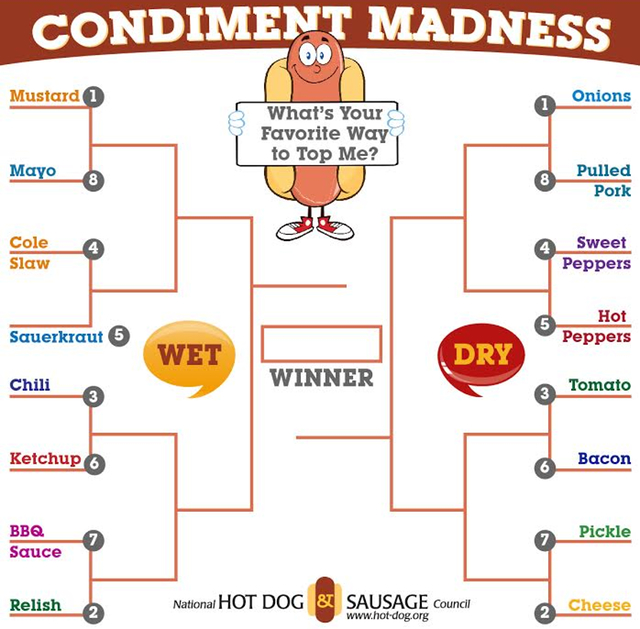 The bracket started a heated debate here at Gothamist HQ about the use of ketchup on hot dogs (or soy dogs, if you're vegetarian). Ben Yakas is pro-ketchup, and has this to say in his defense:

"I'm shocked and appalled at the malicious ways this so-called 'Hot Dog Council' (appointed by what authority, I ask?) has maligned and besmirched the decent American citizens who choose every day to lather their street hot dog with ketchup. Go to any hot dog vendor in NYC and they'll ask if you want ketchup or mustard on your dog—the condiments are yin/yang of hot dog culture. Sure, you can prefer one to the other; but viciously attacking those of us who love to see red-on-red is disgusting. It is clear that this 'Hot Dog Council' is in the pocket of Big Mustard. Ketchup lovers will not be bullied by a made-up organization who try to shame us into acquiescence."

John Del Signore refuses to even dignify this "competition" with a comment, but has firmly declared his anti-ketchup stance during some casual office talk. Yakas took his silence as an opportunity to take one last swing for ketchup, however: "It's just like mustard defenders to disappear conveniently right when the harsh light of injustice is shined upon their faces."

Update: Del Signore has issued this statement: "At a very young age my younger brother fell prey to the sick and twisted subculture of ketchup-on-hot dogs. My family tried everything to help him pull his life together, but nothing worked, and in the end our only resort was tough love. He now lives in isolation deep in south Brooklyn, and we barely speak. Soiling hot dogs with ketchup is a perverse abomination, and one that I find difficult to discuss, for obvious personal reasons. I will have no further comment on this matter—enough lives have been destroyed."

But does the opinion of these two assholes really matter? They're not on the Council, and the Council itself has declared that the "use ketchup on your hot dog after the age of 18" is simply unacceptable. So there you have it. Save the ketchup for your fries, infidels. 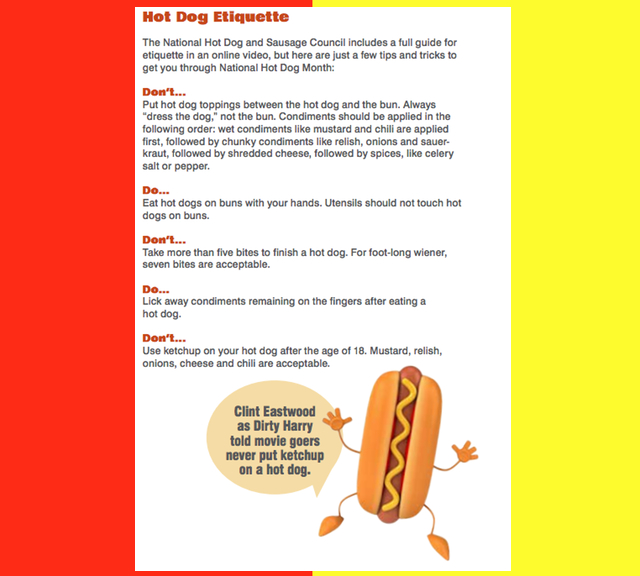 #condiment wars
#condiments
#hot dogs
#ketchup
#mustard
#original
Do you know the scoop? Comment below or Send us a Tip