The Mystery Of The Empty Dean & Deluca Flagship In SoHo Earlier this year Dean & Deluca shut down their Upper East Side location with little warning, and then, despite a previous promise not to, they shut down their new Meatpacking District spot, Stage, this summer. During the same interview with the NY Times, Sorapoj Techakraisri, the CEO of Pace Development—which purchased the business for $140 million in 2014—vowed the flagship SoHo location would also remain open. When the Thailand-based Pace purchased Dean & Deluca there were over 40 stores, now there are just a handful left in the U.S., and their shelves are barren.

Currently, the sprawling space at the corner of Broadway and Prince Street in SoHo remains open for business but has been reduced to a coffee shop. The produce baskets are empty, the pastry displays cake-less, the shelves typically lined with specialty items contain nothing at all. Some bottled water lines the beverage display, slightly more than you’d see during a weather emergency, signaling doom.Still, the signs claim the shop is merely undergoing "renovations."

An employee who has worked there for nine years told Gothamist on Tuesday afternoon, "It's painful to see this. I don't why they're doing renovations this way, with the door open. At least there have been no layoffs yet. They've cut some hours, and some people have left, but no layoffs." 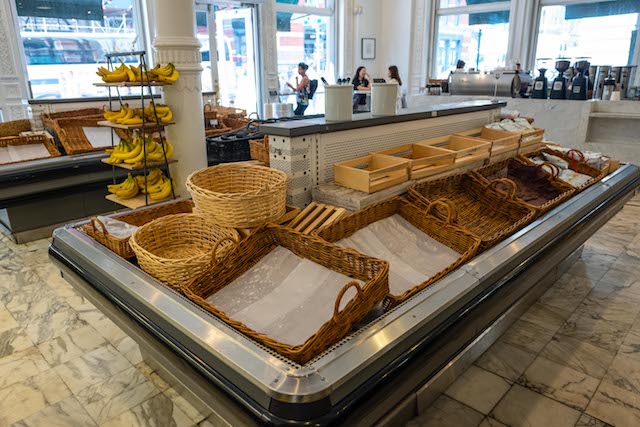 Floor manager Mohammed Rahman echoed the renovation spin to Eater, telling them "the store isn’t closing but rather undergoing renovations... Rahman says he hasn’t been told much about the renovations or when they’re supposed to start."

The once-beloved market was opened by Giorgio DeLuca and Joel Dean in 1977 at Prince and Greene streets, featuring more reasonable prices than recent years (the Broadway store opened in 1988), and was one of the first to serve New Yorkers specialty items (sundried tomatoes! dried morels! 175 varieties to choose from!), eventually reaching beyond the city's borders through a mail order catalog. But the founders brought in investors in the '90s (though retained shares and seats on the board), and sold to Leslie Rudd in 1996, who was the owner when the sale to Pace went through. Then the debt started piling up, and they began pulling out of leases, as vendors went unpaid, and now, they're shutting down stores.

Earlier this year, a strategy report from Pace announced that the parent company was restructuring Dean & Deluca in response to "consumer's behavior." These efforts included "improving the SoHo store,” while “reconsidering our business model and... reducing costs to increase business efficiency." In August the NY Times reported that they had "defaulted on federally mandated payments to former employees and stalled payments to current employees in the United States."

A former Dean & Deluca employee wrote in Salon this month about troubles inside the headquarters.

Eleni Gianopulos, owner of New York City bakery Eleni’s Cookies, has supplied Dean & DeLuca with intricately decorated custom cookies for over 15 years. “I’ve always been paid late but I’ve always been paid in full,” Gianopulos told me of her company’s relationship with Dean & DeLuca when we spoke last year. Then at the end of 2017, that changed. "We negotiated our terms from net 60 to net 30 [days], but then sixty days passed, then more. We were calling and calling and getting no response; we couldn’t get a hold of anyone in accounts payable."

“Dean & Deluca USA and Pace regret the difficulties caused to the gourmet food suppliers in the US and we are currently taking steps to rectify the situation to its normalcy quickly," Techakraisri, the CEO, said in the aforementioned strategy statement.

With their Meatpacking venture, Stage, the new owners hoped to bring a fast food cafeteria to the city, signaling a swing away from specialty items. And the Times noted in their report that some shops were being "stocked with products like Coca-Cola and Chobani yogurt, rather than their craft-made equivalents." Will they now stock the SoHo shelves with regular grocery store items, turning away from the local vendors they owe, or simply shut down the place? The mystery remains as to why the lights are still on, but either way this plays out, Dean & Deluca appears to be at death's door.

#Dean & Deluca
#dean and deluca
#soho
Do you know the scoop? Comment below or Send us a Tip