The Lovely 'Luncheonette And Liquor Bar' Gertie Opens In Williamsburg All-day restaurants, places that are open straight through for breakfast, lunch, brunch, and dinner, pouring coffee and booze with equal enthusiasm, have become increasingly common among each season's new crop of openings. But Gertie, which just started service over the weekend in Williamsburg, deserves your full attention.

The Gertie crew is a formidable one, led by owner Nate Adler, who also runs the well-regarded Basque-bites bar Huertas in the East Village; general manager Flip Biddleman, who, along with Adler, spent time in the Danny Meyer kingdom; and chef Will Edwards, who has worked the kitchen at longtime local favorites Diner, Marlow & Sons, and Reynard. All three are native New Yorkers, and the restaurant gets its name from Adler's grandmother, born and raised in Queens.

The space—designed by Shiber Cohen Studio—is inviting and bright, with a long, windowed frontage on Grand Street across from Emmy Squared. There's lots of light wood, a dramatic crashing-wave sort of thing running the length of the dining room's ceiling, and plenty of pastels, plants and flowers. And of course the seating, for about 50 total, which will increase when the weather gets warm and the small patio out back comes into play. It's a place where you instantly feel comfortable, like as soon as you see it you know you made the right decision by coming here. 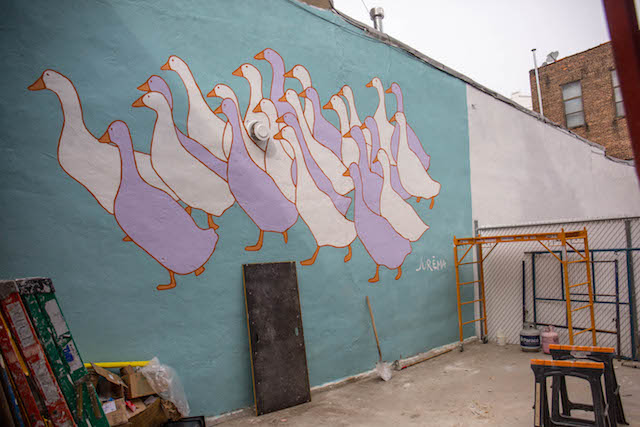 The patio is only just taking shape. (Scott Lynch / Gothamist)

Gertie is a counter service restaurant, though you need to check in with the host by the cashier before you grab a seat. Runners bring your food and bus your table, but rather than the usual number flags, Gertie uses a subway-line design to signal which order goes where. Milk bottles of flat or sparkling water are handed out with welcome abandon. The music spins on a turntable behind the counter (The Stones and Gladys Night and the Pips while I was there), and there's a little library/book-swap case by the front door in case you're dining alone and don't want to stare at your phone.

All of that is good news, but the real reason you want to get to Gertie as soon as possible is the food. Dinner starts in about three weeks, and revolves around rotisserie (the Lamb with Horseradish Sauce will be my opening night order) and intriguing-sounding snacks and sides like Smoked Fish and Chips, Everything Rice and Beans, and Sweet and Sour Squash. But there's plenty to keep you satisfied during daylight hours until then. 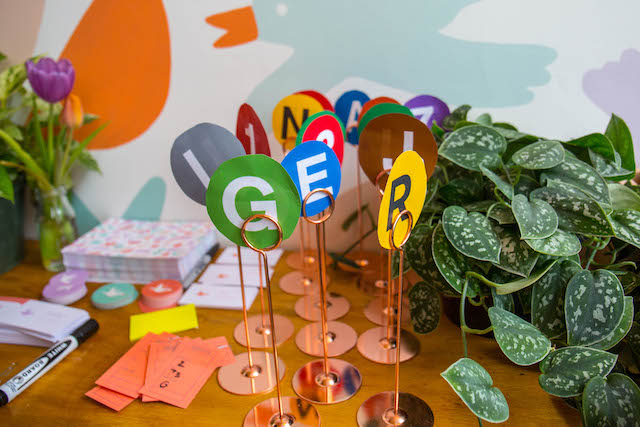 Subway lines instead of numbers to get you your order. (Scott Lynch / Gothamist)

Breakfast begins at 8 a.m., is available all day long, and involves lots of eggs and superb bread and pastries, courtesy of Gertie's in-house baker Savannah Turley. The build-your-own Egg and Cheese Sandwiches, with add-ons like beef salami, pickled peppers, broccoli, and bacon, available on a bialy or English muffin, have already received a lot of attention, and rightly so. But in my experience the real pleasure here lies in the Gertie Breakfast platter: two sunny-side eggs, a bunch of white beans, fantastic, somehow tangy wilted greens, thick slices of buttery toast, and a crock of first-rate, vinegary house hot sauce. Meat is piled on by request, and many are cravings satisfied at one go.

At 11 a.m. lunch kicks in, which also leans heavily on Turley's great bread. There are six sandwiches at the top of the menu—the messy Miss Patty Rueben is on marble rye, eats like a Swiss burger with sauerkraut, and that first hot, juicy bite will buckle your knees. The open-faced Smoked Fish melt is piled on sesame sourdough, the rich whitefish salad doing a fine job standing in for tuna. Rotisserie meats, Chicken Salad, and a couple of vegetarian options round out the choices. Housemade pickles and well-browned potato chips, the latter fried up right over there in the open kitchen, are able accompaniments to them all.

With dinner will come an expanded list of dessert offerings—I'm particularly excited by the promise of pie—but you don't have wait for something sweet and delicious: all the cookies I ate over the weekend were excellent, especially the little dark-cocoa beauty stuffed with cream. Root Beer Floats, Rainbow Italian Ice, and boozy milkshakes are all in the works. You could probably eat here three times a day, plus a couple of snacks, and not get bored. 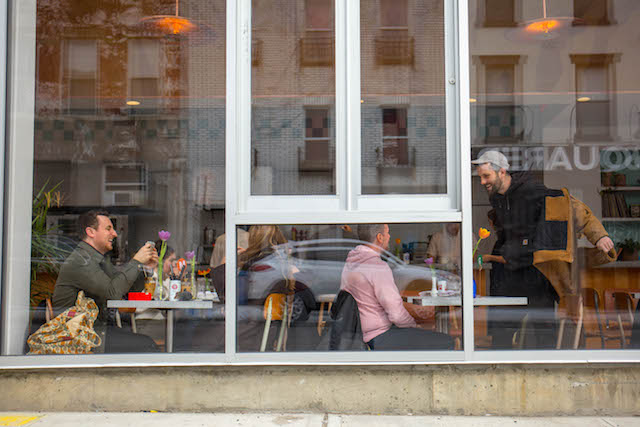 #gertie
#williamsburg
#original
Do you know the scoop? Comment below or Send us a Tip