Our latest installment of Quick Bites brings us to a Bushwick spot with L.A. vibes.

THE VIBE
There's a small slice of Bushwick right near the Jefferson L that feels increasingly like the worst, Hell's Squariest part of the Lower East Side on a Saturday night, with playground bars and screamy restaurants attracting visitors with no stake in the neighborhood in which they are wooo-hooing.

Fortunately, the brand new and instantly appealing Nicaraguan cocktail bar and restaurant Chicha is just far enough across Flushing Avenue to avoid most of that scene, and even seems a little bit like a secret, with its low-key signage—a tasteful, neon beacon that reads only "Rum"—and industrial buildings on either side. In fact, Chicha itself has been cut from a one-time warehouse, the soaring space warmed by its tropical decor. The furniture is pastel and Art-Deco, the details (cigar boxes, gourds, the wood piece that covers one wall) are all imports from Nicaragua, and a colorful jungle menagerie by Bushwick Collective artist w3rc watches over the room from the back.

Chicha is run by Vanessa Palazio and Adam Schneider, who used to make great grilled cheeses at their Little Muenster stands. While this new spot clearly is a more ambitious operation, so far the couple seem up to the task. Service is friendly and efficient (though the sooner all restaurants ban the "let me tell you how the menu works" speech, the happier I will be), the atmosphere fun and festive but also pleasantly grown-up, and the whole thing has a nice labor-of-love feeling to it, drawing as it does on Palazio's Nicaraguan heritage. 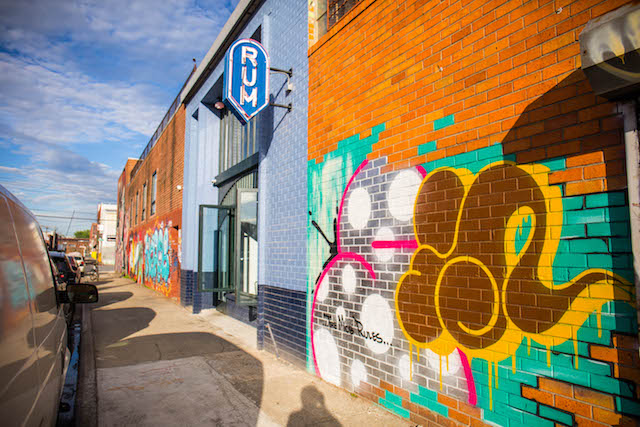 THE BITES
There seem to be a lot of great things to eat on Chicha's short menu, but the place to start your order is in the Quesillo section, a traditional Nicaraguan street food involving delicious things piled atop soft tortillas and which you will be forgiven for calling mini tacos. The Langosta Quesillo was particularly good, the sweet sea meat drenched in (but not overwhelmed by) a thick, lively housemade crema and capped with pickled onions and seaweed, but the Pollo Desmenuzado, or shredded chicken, was a good choice as well.

For a larger, more shareable snack, get the Chicharrones Mixtos, a fantastic basket of deep fried skin from all over the plant and animal kingdoms. Crackling, greasy, airy, intensely flavored—the chicken, pork, salmon, and dulse, a kind of seaweed, are all equally good—it's the best, most addictive bar-nibble dish I've had in ages. Skip the Guacamole Nicaraguense though, which, despite the presence of roasted pistachios and salt cured egg, tastes mostly like onion. Too bad, too, because the accompanying "root chips" are excellent.

There are a couple salad-y offerings, including a crisp and refreshing Curtido, which is basically a cabbage slaw but also with sea beans and a bit of papaya, with everything is tossed in a bright plantain vinegar. And just when I was worried that we hadn't ordered enough food for a proper dinner for two, the Baho arrived, a huge, dense brick of unctuous pig covered in sweet Maduros and rice cooked to a chewy crisp, which in my household we called the concón. It was almost absurdly rich and also deeply satisfying.

Cocktails are an important part of the experience here—there are a half dozen crafted concoctions on the menu, as well as a variety of fancy rums—and so my companion ordered a Agua-Cate-Dra, which included tequila, mezcal, brandy, avocado, lime, sea salt, and pink peppercorn poured over pebble ice. She called it "refreshing and salty" and sucked it down in a hurry. 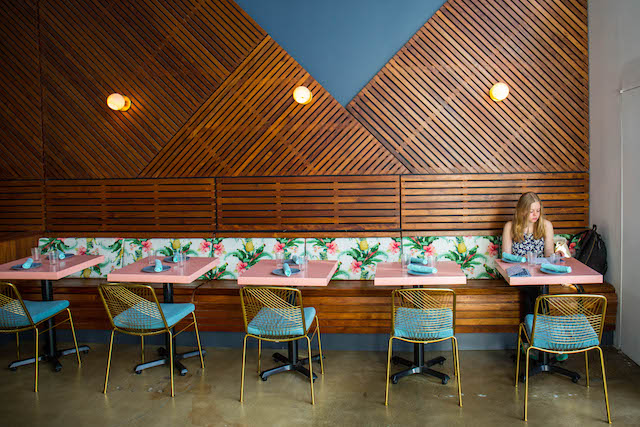 THE VERDICT
Chicha is terrific, with a whole bunch of well-conceived dishes you don't find everywhere else. Great for locals, and worth the fun-night-out trip for the rest of us. And if it's all a bit more expensive than you want it to be—plan on spending about $100 for two, and more if you like drinking—well... you know how high rents are in old warehouses these days.

#bushwick
#chicha
#jefftown
#quick bites
#original
Do you know the scoop? Comment below or Send us a Tip