The Lobster Roll Wars: Update from the Battlefield 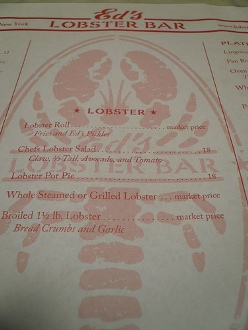 In case you missed it, earlier this week, Rebecca Charles, owner of Pearl Oyster Bar, filed an intellectual property suit against former sous-chef Ed McFarland, alleging that he had stolen recipes and design ideas when he opened his new restaurant, Ed's Lobster Bar. Here's what has gone down since then. Ed held a press conference. Grub Street describes Ed's response: “I am deeply saddened to learn that Rebecca Charles has brought an action against me,” McFarland announced. “I believe her action has no merit. I harbor no ill will and wish her safely to port.”

Aw, how very nautical. Eater has rounded up some outside opinions on the matter -- restaurateurs from the likes of the Spotted Pig, Freemans, and Lure Fishbar. Ken Friedman remarks that "[h]e who betrays someone who is loved by the nyc restaurant community, as Rebecca is, will have a rough time." Danny Meyer adds, "it's ultimately the special alchemy that exists between the place's staff and its guests, as well as its location and context that makes one place taste and feel different from another." Megnut weighs in as well, noting that details like packets of oyster crackers and a white marble bar are nothing new: "Have you ever been to New England or France? Rebecca Charles hardly invented these concepts ten years ago. Instead, she was free to incorporate them in her new place because they've existed for so long and been used by so many; because they haven't been copyrighted and trademarked by lawyers and corporations. These details are the essence of our seafood restaurant vernacular, that's why they resonate with so many potential customers and give her West Village restaurant an authenticity she's now trying to control. Mr. McFarland would be hard-pressed to open an authentic-seeming lobster bar without including at least some similar items."

Meg has a point, but as Rebecca pointed out when she spoke to Ed Levine, it's more than those details. "Thirty-one of the 34 dishes on his menu are simply lifted from Pearl." Tune in next week for the next update from the lobster roll wars.