The Little Newsstand That Could Wins Coffee Battle Against Starbucks

Earlier this month came the tale of a Bronx newsstand that had been barred from selling coffee and tea by its building management after a Starbucks moved into the building. Now a very happy update comes from Norwood News: the little kiosk that could has been cleared to sell its caffeine beverages once again. We can believe in the power of the petition, people!

Building employees were frustrated that their outlet for inexpensive java had been yanked while the stand itself teetered toward the brink of extinction from loss of revenue. The management at One Fordham Plaza has still refused to acknowledge anything about the incident; for its part, Starbucks denied any involvement, saying it "welcomes competition" from independent stores.

Now that balance has been restored to the universe, office workers can once again stop by for their cups of joe and plastic-wrapped bread products. But let us never forget saddest sign ever: 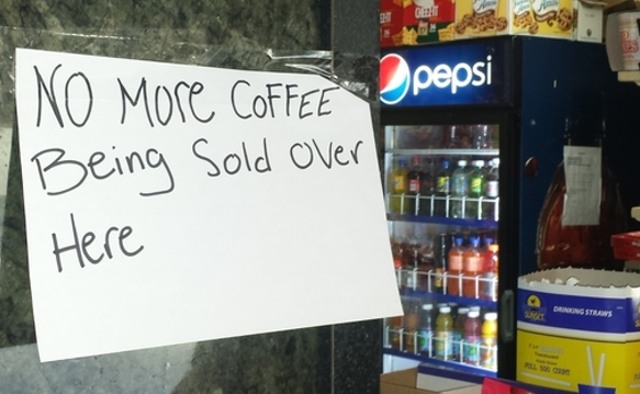