It's five o'clock somewhere, and The Campbell (née the Campbell Apartment) is now officially reopened. The bar, hidden away in Grand Central’s southwest corner, has a storied history, and most recently underwent a somewhat controversial ownership change. This transition has, of course, included renovations that have shut the doors for months.

The space, originally under the lock and key of John W. Campbell, has over time been an office, a parlor, a jail, a storage closet, and since the late 1990s: a bar. In April 2016, however, it was announced that the space would be taken away from original bar owner Mark Grossich, who spent $2.5 million on restorations, and given to Scott Gerber, who runs The Gerber Group. At the time, MTA spokesman Stephen Morello explained that Gerber offered “significantly more” money for the space.

And now, life begins again for the bar, which, to be honest, needed a little update. The first photos show promising, subtle retouches, with the original classic charm intact. And maybe even showing through more. 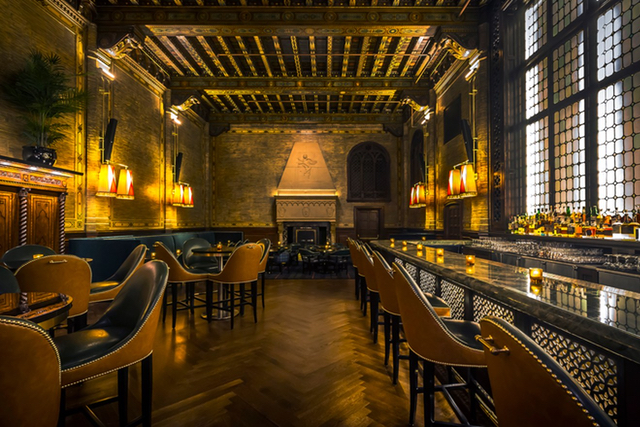 "Since the space is historically landmarked, Gerber Group and Ingrao were constrained in just how much they were able to do, and all changes had to receive the blessing of the State Historic Preservation Office. This limited the renovation to updating existing features of the rooms, and adding seamless elements that optimize guest experience while staying true to the character of the space: A new custom lighting system, for instance, better highlights the hand-painted ceiling; the oversize fireplace remains intact; and a new air-conditioning system keeps guests comfortable and climate-controlled more than ever before. The leaded stained glass window and all original millwork remain intact. Luxurious new mohair and leather barstools and banquettes add warmth and texture to the space."

The downside for longtime visitors, of course, is that what was a historic little place to visit during uncrowded happy hours and on lazy late afternoon Sundays — before the real nighttime crowds — is now going to become more popular around the clock. Good for business, bad for those wanting to drink their Scotch in peace on a barstool.

We'll have more photos coming on Thursday, but the spot, which has a shortened name: The Campbell, is now open for business.

The Campbell is located at The Campbell, 15 Vanderbilt Ave, inside Grand Central Terminal.

#gerber group
#grand central
#the campbell
#the campbell apartment
Do you know the scoop? Comment below or Send us a Tip
A new Gothamist is coming! We’ve moved comments over to our beta site. Click here to join the conversation and get a preview of our new website.