The Last of the Real Clam Bars 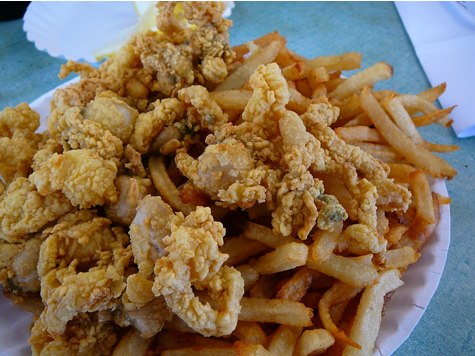 The story: a man walks into a clam bar and orders a plate of fried clams, and the confusion begins. “Fried clams” can refer either to squiggly strips a la HoJo’s (RIP), or clam bellies. Otherwise known as Ipswich clams, bellies refer to the shucked ball-and-chain shaped whole bivalve, minus the clam’s soft shell. In its fried form, Ipswich clams are harder to find. Regardless, there are few restaurants that serve fried clams in either form; those that do include the array of boutique oyster bars in Manhattan, and Brooklyn Fish Camp. Also in Brooklyn is the passable but nonetheless iconic Randazzo’s of Sheepshead Bay. For summer, in season clams are starting to appear on special menus: this week, Country is doing an upscale take on clam shack food, serving fried Ipswich bellies with local flounder, sauce gribiche, and frisee salad. And starting July 6th, Savoy will once again offer its special fixed-price summer clambake menu ($60, with clams on the half shell). Meanwhile, up north, the blenders and kitchens at Johnny’s Famous Reef and the rest of City Island’s fish houses are about to go into deep fried overtime. Summer is your best chance to get some real fried clams.

The wisdom in Ed Levine’s fried clam roundup from last year still holds. While it mentions Mary’s Fish Camp and Pearl Oyster Bar among the best places to get fried Ipswich clams, it also names Bigelow’s in Rockville Center as a contender. Established in 1939, Bigelow’s Seafood is the year-round epicenter of Ipswich clams, and a short trip on the Long Island Rail Road. Their prizewinning bellies belie the most basic inclusion criteria for its place among the city’s best restaurants- Bigelow’s is in Nassau County, just five miles outside of the southern Queens border. Despite this, the interior of this cash and counter stools only restaurant is plastered with a few decades’ worth of reviews from NYC newspapers and restaurant guides. There’s even an autographed picture of Telly Savalas, with endorsement, hanging next to Bigelow’s front door.

At Bigelow’s, Ipswich belly clams are breaded and fried to order in soy oil. Pre-fry, clams are doled out in 9-ounce portions, regardless of the shucked clam’s size, and Bigelow’s charges market prices. While Ipswich clams no longer really come from Ipswich, factors such as Red Tide continually change market conditions. Yesterday, an order of clams (with a side) cost $19.95 (an order of excellent fried oysters was $15.95). The good news is that this turned out to be a plateful of about twenty clams (see photo above), each the size of a medium gumball. But they're the farthest thing from gummy- the clams are crispy, buttery, and soulful. The counter staff will set out some dinnerware on a napkin in front of you, but it’s best to use your hands when you eat. Caddies of various sauces, including tartar, are stationed along the counter, every few seats. Unlike previous reports, the French Fries at Bigelow’s are homemade. Just be warned: the fryers are set at lower temperatures to best serve the seafood, so the fries are never super-crispy. They’re more like added value, a second thought. Depending on the market, it’s a beautiful deal- twenty clams for twenty clams, at one of the last places of its kind in New York.