Late last year Patrick Watson, the owner of The JakeWalk on Smith Street, contacted us with some concerns that his bar may become victim to the Smith Street Curse (our term, not his). The bar is nearly 9 years old now, which means it has lasted a few years more than the average new business life span on the South Brooklyn street. It's not going to make it to the 10 year mark, though. Watson contacted us yesterday with an update: The JakeWalk will close on October 21st.

"It's been a good run," Watson told us, "and the fact that we pretty much finished the lease is incredible. The JakeWalk will always be close to our hearts and will be missed by its regulars. We are slowly getting the word out so people have the chance to join us one last time." 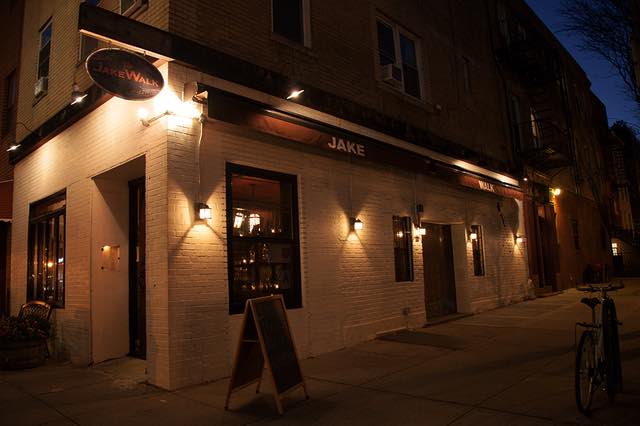 Last year Watson had very real concerns about business in general in the area—"Smith Street is lacking the traffic during the week, making it a very difficult climate for small businesses... especially the bars and restaurants." At the time, Watson was only able to keep the place open for 5 nights a week, some nights only bringing in around $400. "I know we are not alone, and sadly still one of the busier spots on Smith," he said. So what's been happening with Smith Street? Gentrification, chains, and greedy landlords have been cited. Watson told us that a lot has changed since he opened The JakeWalk's doors in 2008:

Our community has been hearing a lot about the demise of Smith Street businesses and the amount of closings in the last 2-3 years is proof enough. Our neighborhood has changed so much, so quickly. When we opened The JakeWalk... each and every bar/restaurant was packed and over-flowing with people. Smith Street was a destination for nightlife and after the markets crashed in 2008, this neighborhood like many, began to feel the affects of instantly slower business. It's like a light switch got turned off.

Over the last few years, the higher quality bars/restaurants have closed, rents went from $5,000 per month to now $12-15,000 per month, forcing good restaurateurs and bar owners to go to other, now more popular, neighborhoods. Now Smith Street competes with Bushwick, Williamsburg, and many other up and coming areas. The businesses that made this such a desirable neighborhood are no longer here.

Another issue Watson had brought up was a shrinking neighborhood population: "When I moved to this neighborhood in 1996, each of these 3 story brownstones were a 3 family home. Now, many of them have been renovated into a 1 family home, shrinking the density substantially in the area. The total the amount of people who live in the area simply can not support the amount of businesses that are open."

Goodbye JakeWalk, we'll miss your fondue. Speaking of, Watson tells us he'll be "focusing our energies on our retail locations," which includes Stinky BKLYN, a cheese shop just down the street.

The JakeWalk is located at 282 Smith Street on the corner of Sackett, and you should go before they close forever.

#carroll gardens
#jakewalk
#patrick watson
#smith street
#the jakewalk
#original
Do you know the scoop? Comment below or Send us a Tip