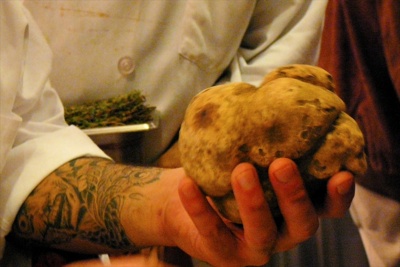 Clutched like a shot put by a chef in Le Cirque's kitchen, here’s a photo we took of that $7000 truffle that has been making the news this week- it even landed in the Daily News' gossip pages. In true Page 6 style, we became ad hoc truffle paparazzi Tuesday night in an effort to score a candid of the truffle at the restaurant. Armed with our crummy digital camera and generally warded off by Le Cirque valets, we knew the moment had arrived when the delivery car pulled up: From 5 yards away, the October air literally filled with the smell of truffles as the car doors opened.

This particular white truffle was found Monday in Italy and was rushed to Malpensa Aiport in Milan, where it boarded a flight for New York. There it was intercepted by renegade “truffle man” John Magazino of Primizie Fine Foods, and rushed with “bodyguard” in tow (Magazino’s friend, it turns out) to Le Cirque. Magazino, who was profiled last year in the New York Times, is currently shopping around the remaining few thousand dollars worth of truffles from the same haul as the mammoth fungus.

So marks the unofficial start of white truffle season in New York, which will likely peak with the James Beard Foundation’s November 8th “Truffle Towns of Italy” gala and auction to benefit the Foundation’s various programs. For that one, they’re flying in 25 pounds of Italian truffles and poaching a few truffle specialist chefs; tickets start at $1,000 for Beard Foundation members. As Le Cirque's Mauro Marconi told us yesterday, the season is off to a rough start because “the weather is not great in Italy and there’s a huge scarcity of truffles.” Other chefs checking in with us bemoan the currently super-high price of truffles as a stumbling block and aren’t including them on fall menus yet. As the season goes on and the price drops, we’ll attempt to compile a list of restaurants where you can try truffles and still have some money leftover for morning coffee. In the meantime, just stay away from truffle oil, which is filled with so many hydrocarbons that just going near the stuff is like huffing gas. And real truffles are worth seeking out: The proto-modern food personality Anthelme Brilliat-Savarin famously asserted that “The discovery of a new dish does more for human happiness than the discovery of a new star.” Wonder what Anthelme might have said about the discovery of a white truffle the size of a small meteorite.